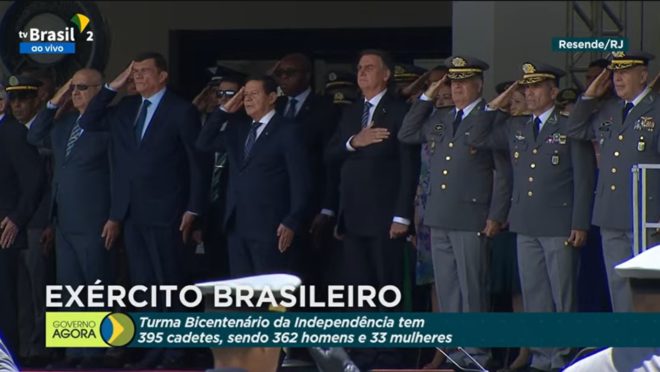 President Jair Bolsonaro (PL) participated this Saturday (26) in the first agenda at a public event after his defeat to Lula (PT) in the second round of the presidential elections.

Bolsonaro was in Resende (RJ) at the graduation of cadets from the Academia Militar das Agulhas Negras (Aman), where the president himself graduated in 1977.

The president did not speak, unlike the other graduation ceremonies he attended at the same Academy. He participated in the entire event, including handing over the officer’s sword to the student who was ranked first overall in the graduating class.

The commander of the Army, Marco Antônio Freire Gomes, began his speech by thanking the presence of the President of the Republic.

“I am sure that his dignity, his devotion to the family, his love for Brazil and unshakable faith in God will be a reference in paving the paths that the young people in front of him will tread from today”, said the general.

Next to Bolsonaro were the vice president and senator elected by Rio Grande do Sul, Hamilton Mourão (Republicans), the Minister of Defense, Paulo Sérgio Nogueira, and generals Luiz Eduardo Ramos, chief minister of the General Secretariat of the Presidency, and Augusto Heleno, head of the Institutional Security Office (GSI).

As reported by the People’s Gazette, still on Friday night (25) there was no confirmation that the President of the Republic would speak at the event.

Bolsonaro even held meetings and talked about the subject with allies and members of his “hard core” to decide on the convenience of a speech.

The same report pointed out that some allies believed that Bolsonaro could avoid the speech in order not to create a “hustle” in the face of the current political scenario, amidst the contests to the electoral result and the protests in front of the barracks and on highways.