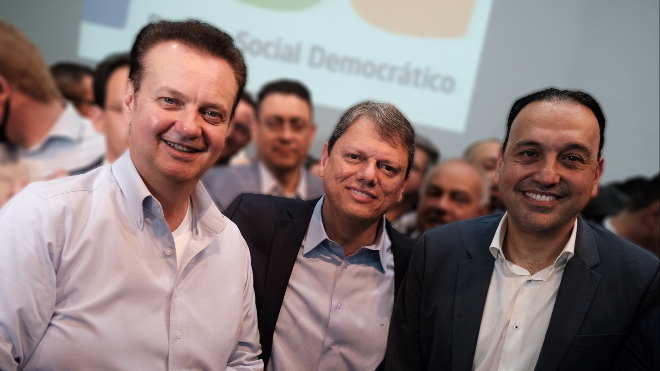 The governor-elect of São Paulo, Tarcísio de Freitas (Republicans), began this week to divulge the names of the secretaries of state who will occupy the top echelon of his government from 2023 onwards. being reserved for the PSD, the party that was part of the coalition supporting Tarcísio. Already names from the PL and Republicans are quoted to stay with the Public Security and Social Assistance secretariats.

The PSD president himself, Gilberto Kassab, was announced this Friday (25) as Secretary of Government, which consolidates him as one of Tarcísio’s main articulators. In the portfolio, he will be responsible for articulating the Palácio dos Bandeirantes with the Legislative Assembly of the State of São Paulo (Alesp) and with the mayors of the 645 municipalities in São Paulo. In past administrations, this function was the responsibility of the Civil House, but it was adequate for the presence of the PSD president as secretary.

Nationally, the PSD is part of the transition team of President-elect Luiz Inácio Lula da Silva (PT). The invitation, made by the president of the PT, Gleisi Hoffmann, was accepted by Kassab in the first days of Lula’s transitional government.

In addition to Kassab, four other secretaries were announced by the new São Paulo government by this Friday: Renato Feder in Education; Eleuses Paiva (PSD) in Health; Natalia Resende in the new Transport, Infrastructure and Environment portfolio; and Arthur Pinho de Lima at the Civil House (see below a brief profile of each of them🇧🇷 All selected names must be announced by mid-December.

“From the beginning, in the campaign, we had talked about setting up a technical secretariat and that is what is happening. We are looking to verify what our projects are, our priorities and public policies, bringing very technical profiles to compose this secretariat”, said Tarcísio during a press conference on Friday (25).

While the other names are still being defined, work on the transition has already begun. The main objective at this time, according to Tarcísio, is to lay the foundations for the 2023 Budget Guidelines Law (LDO) by the first week of December.

The transition team has 105 members and is divided into eight groups: agriculture and supply; social development, women and PCD (people with disabilities); education, culture and sports; public safety and penitentiary administration; tourism; management, economic development, science and technology and finance; environment, housing and infrastructure; and health.

Republicans, PSD, PL and PSC have representatives in the transitional government. Novo is also on the team, being represented by former candidate for state governor Vinícius Poit. Other parties that supported Tarcísio’s candidacy in the second round of the electoral campaign, such as União Brasil, PP and PSDB, did not participate.

This is the first government transition in São Paulo since 1994, when the management of Luiz Antonio Fleury Filho (MDB) passed the position to Mario Covas (PSDB). In these 28 years, only Tucano governors commanded the state and therefore there was no need for the regime.

Another PSD name with an important assignment in the transition team is that of former deputy governor of São Paulo Guilherme Afif Domingos. The former minister had previously coordinated the government plan and was appointed by the elected governor to lead the transition. Afif is appointed as a favorite to take over the Planning Secretariat or the Strategic Projects and Actions Secretariat.

The vice-governor-elect, Felício Ramuth (also from the PSD), is quoted for the Economic Development Secretariat. Another Kassab ally, Marcelo Branco, former Secretary of Transport for the City of São Paulo, is appointed as one of the favorites to head the Secretariat of Metropolitan Transport, another important portfolio in the São Paulo government.

Tarcísio’s nods to President Jair Bolsonaro’s (PL) allies, for whom he was Minister of Infrastructure, should be in the Public Security portfolios, with the appointment of federal deputy Captain Derrite (PL-SP), and in the Secretariat for Women and Human Rights, with São Paulo councilwoman Sonaira Fernandes (Republicans), who has already acted as an advisor to federal deputy Eduardo Bolsonaro (PL-SP).

Arthur Lima is another trusted name of Tarcísio. The former president of the EPL will command the Civil House, with responsibility for conducting the main management programs.

Two other folders in Tarcísio’s secretariat should also receive indications of technical profiles: the Treasury, with former advisor to the Minister of Economy, Paulo Guedes, and economist Samuel Kinoshita being the most quoted; and Management, for which Bruno D’Abadia is the favorite – he recently left the Administration Secretariat of the Government of Goiás.

The Olympic medalist Maurren Maggi, who is also on the transition team and was Bolsonaro’s electoral supporter in the elections, is the favorite to take over the Sports Secretariat.

Discover the profile of the secretaries announced so far

Born in São Paulo (SP), Renato Feder holds a degree in administration from Fundação Getúlio Vargas (FGV) and a master’s degree in economics from the University of São Paulo (USP), with experience as a teacher, manager and director of schools.

Feder was Secretary of Education and Sport in the Government of Paraná in the first term of Ratinho Junior (PSD). The management was marked by the implementation of the civic-military school model, as well as the hybrid teaching model during the Covid-19 pandemic.

Before leaving office, the secretary defended a Public Private Partnership project for education, with the participation of companies in the management of public schools. The Government of Paraná opened a public notice to select managers for 27 state schools.

Eleuses Paiva was president of the Brazilian Medical Association (AMB) between 1999 and 2005. He has also been deputy mayor of São José do Rio Preto (SP) and federal deputy for three terms, and on two occasions he took over as an alternate.

Paiva was an advocate of broad vaccination against Covid-19 throughout the pandemic as a way to control the spread of the virus and the use of masks. He also criticized the federal government’s lack of dialogue with states and municipalities.

With a degree in law and civil engineering, Natalia Resende is a federal attorney at the Advocacia-Geral da União (AGU) and the first woman announced for the secretariat. She is a master and doctoral student in Environmental Technology and Water Resources at the University of Brasília (UnB). She was a legal consultant at the Ministry of Infrastructure during the Tarcísio administration. She also coordinated the National Chamber of Infrastructure and Regulation and the Special Secretariat for the Investment Partnerships Program during the Michel Temer (MDB) government.

Arthur Lima at the Civil House

Arthur Pinho de Lima is a lawyer and specializes in public management and geo-historical bases for strategic formulation. In addition to the presidency of EPL, Pinho de Lima was general coordinator of Registration and Tenders, president of the Tender Commission of the various modalities and auctioneer at the National Department of Transport Infrastructure (DNIT).

gilbert Kassab at the Government Secretariat

Gilberto Kassab is the founder of the PSD and has experience in various positions in public life in São Paulo. He was federal deputy for São Paulo in two consecutive terms (1999 to 2005) and mayor of the city of São Paulo for two terms, between 2006 and 2013.

Kassab was also named Minister of Cities by Dilma Rousseff (PT) and Minister of Science, Technology, Innovations and Communications by Michel Temer (MDB). The last public position occupied by the former mayor of São Paulo was the secretary of the Civil House in the mandate of João Doria (PSDB) in the Government of São Paulo – he did not hold it, however, because he asked for leave before taking over.