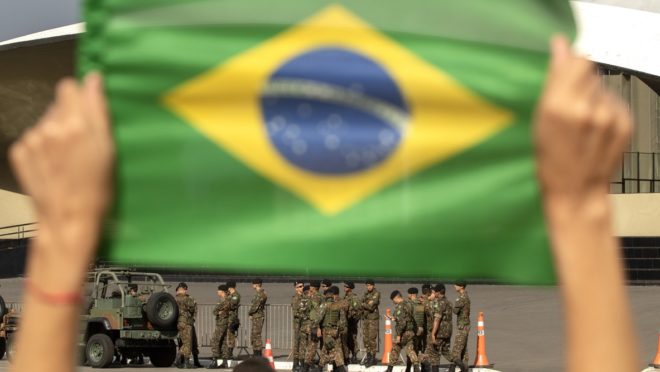 The military watch the post-election political scene with criticism and concern. Whether active or retired, most support the protests organized by a portion of conservatives since the end of the elections, although not everyone agrees with the concentration of demonstrations in front of barracks. There is also a majority understanding that the Liberal Party’s (PL) challenge to the result of the presidential election is legitimate and that judicial determinations and other actions by Minister Alexandre de Moraes are mistaken and even unconstitutional.

The summary decision to reject the representation of the PL that asked for the annulment of votes counted in 279 thousand ballot boxes in the second round is one of the determinations of the president of the Superior Electoral Court (TSE) evaluated as controversial by reserve military personnel heard by the People’s Gazette🇧🇷 According to him, Moraes’ dispatch is criticized for ignoring a suspicion of fraud in the electoral process and also for the risk of further inflaming the protests in the country.

In case of an escalation of tension in the streets, it would be up to the military to guarantee law and order, which could result in military intervention, as demanded by many of the demonstrators in front of the barracks. This would only happen, however, in a more drastic scenario, with civil disobedience, disorder and possible conflicts between civilians, analyzes retired Army general (“four stars”) Maynard Santa Rosa, a former member of the Army High Command.

“If there is a serious disturbance of order where the police forces are not able to control it, then it is fatal for the Armed Forces to intervene”, he analyzes. Santa Rosa was head of the Secretariat for Strategic Affairs (SAE) of the Presidency of the Republic under President Jair Bolsonaro (PL), but resigned in 2019 due to disagreements and criticism of the government.

Retired Brigadier General Paulo Chagas is another who does not rule out the possibility of a reaction by the military due to the same conditions that he classifies as “crowd cholera”, although he disagrees with the interpretation given by some military personnel and jurists to Article 142 of the Constitution. “It’s better that we solve the problem without interference from the Forces, as an attitude in that sense to put order in the house would not be legal. But it would be legitimate and necessary”, he says.

Even without understanding that there is constitutional support for such a drastic measure, Chagas assesses that, in a scenario of need to restore order, the measure would be supported by the “soldier’s oath”. “For the soldier, the oath is above all guarantees, even the Constitution”, says the general, a critic of Bolsonaro’s attitudes and the relationship built between the government and Centrão.

Reserve division general Santos Cruz, former chief minister of the Secretariat of Government and disaffected by Bolsonaro and the government, does not share the ideas that the Armed Forces can act as a “moderating power”. He also preaches respect for the Constitution, which, in his understanding, does not confer any explicit right for the military to interfere in the functioning of other powers.

“What is our moderating power? Our Constitution, our laws, our parliamentarians, our Judiciary and our Executive with all the defects they have. They are obliged to seek a conciliation. They are obliged to seek the harmony foreseen in the Constitution without interference from the military area”, he said in an interview to the BBC News Brasil website.

Reserve colonel Walter Félix Cardoso Júnior disagrees with Santos Cruz’s view because he understands that Brazil is already in a situation of institutional disorder. He assesses that the country walks on a “razor’s edge” and considers that the current scenario, especially after Moraes’ rejection of the PL’s appeal, is “very dangerous”. “We are facing an abyss, the risk of people entering into a social upheaval is very high”, he analyzes. Bolsonaro’s critic, he worked with Santa Rosa at SAE and also resigned.

Despite more pessimistic assessments among the military, the most likely scenario considered by the general officers is the diplomacy of president-elect Luiz Inácio Lula da Silva (PT) and his inauguration on January 1, 2023. because of the risks, omissions and conciliation of interests that involve the current process, although I personally understand that it is a mistake”, says General Santa Rosa.

He claims to have suspicions about the process and the election result, and understands that the challenge made by the PL rejected by Alexandre de Moraes is legitimate.

General Paulo Chagas has the same assessment of the right to question the electoral result, but assesses that, if the scenario does not change and there is no evidence of fraud in the elections, he considers that Lula has the right to “go up the ramp” and take office, as required by the Constitution.

“If he has the right to rise [a rampa], and the right to climb who gives him is the law, it will happen. The best path is the right one, doing the right things. If I suspect that something didn’t happen, let’s prove it”, says Chagas. “If Lula takes over and the process continues, research and verify that there was fraud, we will have to cancel [o mandato do petista] and hold a new election, as happened in Germany”, he adds.

General Santos Cruz told BBC News Brasil that neither the elected government nor the population need fear the Armed Forces’ commitment to the democratic regime. Prior to People’s Gazette, he opposed calls for military intervention. For him, the Brazilians who are demonstrating at this moment are important for the construction of an opposition that favors inspection of the acts and decisions of the elected government, as long as it is constructive and organized.

A former army intelligence officer, Colonel Félix defends “a lot of patience and tolerance”, but guarantees that the barracks are not “quiet” and that the ground force’s intelligence activity is vigilant at everything. “The military authorities are very serene, they play a big game of chess with the STF [Supremo Tribunal Federal] in the person of Alexandre de Moraes. There is a game in which he wants the Army and the Armed Forces to fail, and vice versa. All with the aim of resolving this situation in the political field and not otherwise,” he says.

The military’s criticism of Moraes’ and TSE’s decisions

Moraes’ rejection of the PL’s request to challenge the elections was not the only measure that angered the military. The recent request for a statement from the Attorney General’s Office (PGR) to a request for the removal of the Minister of Defense, General Paulo Sérgio Nogueira, caused embarrassment among active and reserve military personnel in the three forces.

Two active duty military personnel in the Armed Forces, not in the federal government, tell the People’s Gazette that the reaction was very negative and critical in the barracks. Although the PGR’s request for an opinion is a legal practice, the perception is that Moraes could have rejected the request and that he would not have done so to embarrass the minister, who is a former commander of the Army.

General Santa Rosa maintains that the decision was poorly evaluated and bothers the military. “Who would have to be removed is the minister of the Supreme. It bothers everyone because no one can accept violation of constitutional guarantees and be conniving, and that’s what is happening. [Não pode] to issue an opinion on ballot boxes, on court decisions, on these things… this is an aberration”, he says.

Colonel Félix considers that Moraes’ decision was one more reason why he understands that the Armed Forces have behaved in a “very balanced and mature” way to avoid a “confrontational situation”. Another sentence by the magistrate criticized by the military is that guardianship councils curb the presence of children in protests across the country.

Vice President Hamilton Mourão (Republicans) is critical of Moraes’ decision for military police and state traffic departments (Detrans) to act to inspect federal highways. He understands this to be an unconstitutional and illegitimate determination for violating the federative pact.

Senator elected by Rio Grande do Sul, the general also questions the meeting between Moraes and state commanders of the PMs last Wednesday (23) to discuss protests and elections. In a document prepared by his legal advisor, which the report had access to, Mourão maintains that the meeting is inappropriate, since the Federal Police (PF) is responsible for electoral crimes.

“If it is to act in support of the TSE, it is not justified because the electoral process has already ended. If it is to clear federal highways, it cannot because it is a constitutional attribution of the Federal Highway Police (PRF)”, informs the study. “If it is to act as an auxiliary force of the TSE, it is unconstitutional because its competence is to act as an ostensive police, without competence to draw up records or investigation, in addition, the subsidiary performance of the Military Police is punctual, even when it acts as a force auxiliary of the Army, not fitting a generic orientation or determination to the general commanders”, complements.

How generals observe protests across the country

Mourão defends the protests in Brazil and classifies the movement as a “collective catharsis”. “These people are not on the street in a disorderly way, they are in a process of, let’s say, in a collective catharsis, isn’t it, I can put it that way, in the sense of accepting something that they consider was not correct. And time is right. the lord of reason”, he said in an interview at the end of a visit to the headquarters of the Community of Portuguese Language Countries (CPLP), on Wednesday.

The vice president also assessed that the demonstrations are not “coup-mongering”. “This was something that you in the press are talking about. This is a manifestation of people in Brazil, it is an internal issue for us, who did not conform to the process, who consider that the process is flawed”, he added.

Colonel Félix understands that the demonstrations are legitimate. “It is the right of the people, this right is guaranteed in the Constitution and the people are exercising their right”, he says.

“The place is not appropriate to pressure those who have to be pressured. Congress, particularly the Senate, is the one who has interference and power over the STF, that thing of weight and balance”, says Chagas, who is in favor of processing requests for impeachment of Supreme Court ministers. “The Senate has the power to pressure the ministers. If they do that, the military will be outside the limits of its competence”, he adds.

General Santos Cruz understands that many of the questions and accusations of fraud are made without technical basis. “This is not rational, so there’s no point in wanting to explain, wanting to discuss, right?”, He told the Metrópoles website. “And fanaticism always ends in violence, you have no way out, sometimes it doesn’t end in physical violence, but you end up fighting with friends, in a family environment”, he added.