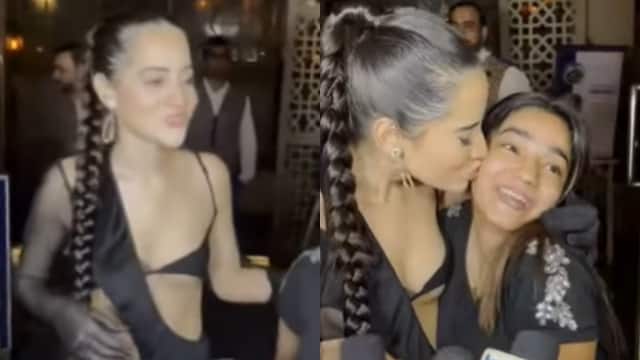 Urfi Javed may be disliked by many, but there is no dearth of fans. His fans are found from the airport to any event. Something similar happened on Monday evening when Urfi was in front of the media and a fan came to meet her. The fan’s happiness knew no bounds on seeing Urfi. She also does not disappoint him and clicks photos with him. In the end, Urfi kisses the fan on the cheek.

Urfi wore a black cutout dress on this occasion. He made a long braid. Also wore gloves in his hands. She clicks pictures with many fans present there. Just then a girl comes and says she is a big fan of his dressing sense. She expresses her happiness in front of the fan media. Urfi hugs her fan and kisses her on the cheek.

Apart from Urfi’s fans, he was trolled like every time on social media. One user wrote, ‘Urfi is ruining our Indian culture and giving wrong message to today’s generation.’ One wrote, ‘Ek minute, kya pasand hai dressing, oh brother, what has happened to the youth.’ One user said, ‘Will you make the youth like you?’ One wrote, ‘Such a little girl is speaking that it feels good. Hey man, get him to stop all this.