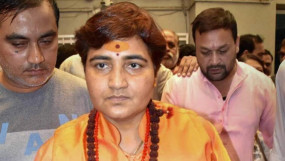 Digital Desk, Bhopal. In the growing era of internet, the statistics of cybercrime is also increasing rapidly. Tech-savvy people are doing the work of cheating people in different and strange ways through the Internet. Something similar has happened with BJP MP from Bhopal, Sadhvi Pragya Singh Thakur. He received obscene video calls on WhatsApp from unknown numbers. It is reported that the video caller was a girl and as soon as the MP received the call, the girl started taking off her clothes. On this the MP disconnected the call.

But the criminals didn’t stop there and sent clippings to Pragya demanding money from her. The MP has lodged an FIR at the TTnagar police station. The search for the accused has started.

threatened to make the video viral

According to information, MP Sadhvi Pragya Singh Thakur received video calls on WhatsApp from mobile numbers 82807-74239 and 63716-08664 on Sunday evening. As soon as the MP received the video call, the caller girl started taking off her clothes and when the MP disconnected the call, she was texted with video clippings recording the MP and the girl.

Not only this, the accused have threatened to make the obscene clipping viral if the demand is not met. Seeing the seriousness of the matter, the MP has lodged a complaint with the TT Nagar police station. The police have registered a case under sections 354, 507 and 509.

The gang has been active for a long time

Significantly, the gang blackmailing people by sending video clippings of girls by making video calls on WhatsApp has been active for a long time. The same has happened with Neeraj Dixit, the Congress MLA from Chhatarpur district. Many times people get trapped in the trap of the gang and do not complain for fear of defamation.