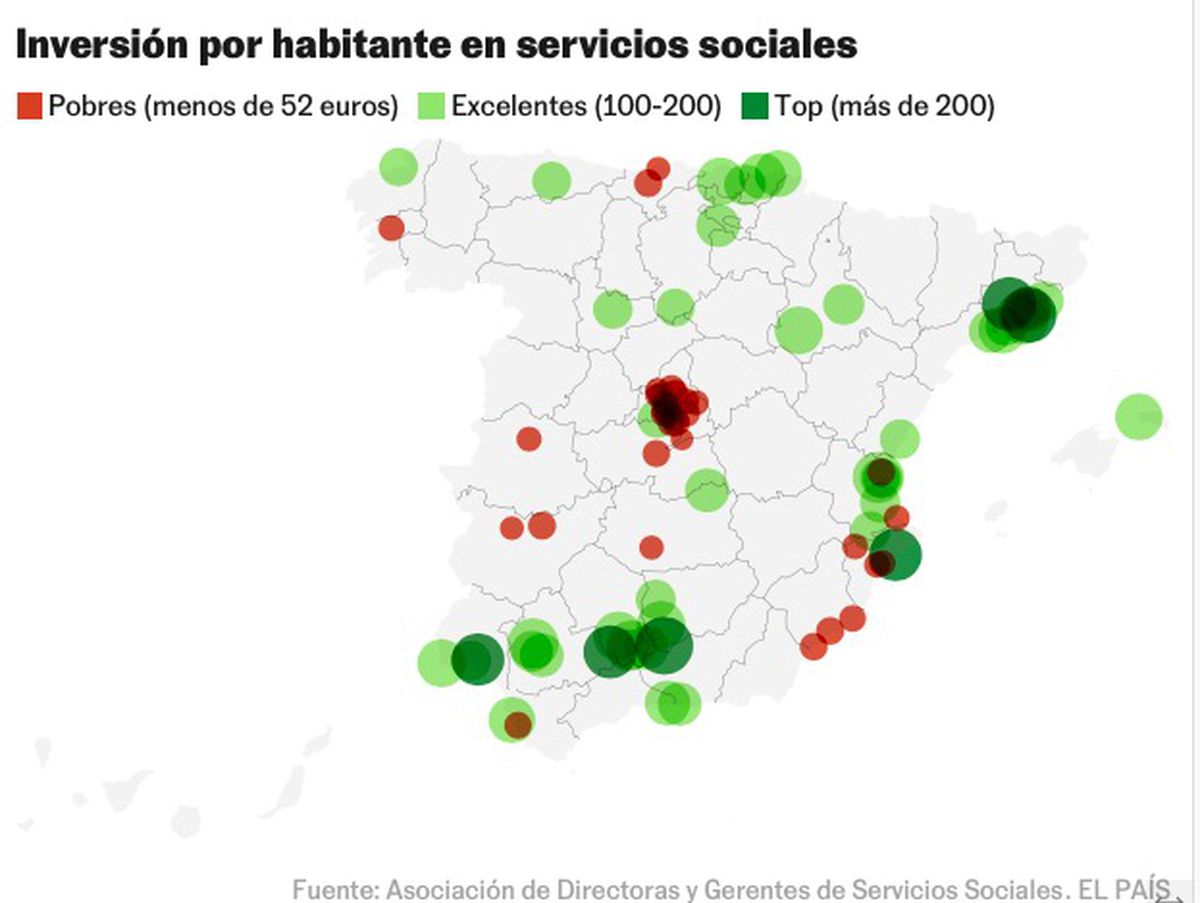 Inform and guide. Provide home help for dependent people or, for example, single-parent families with several children. Ensure that everyone has accommodation and provide emergency financial support. Promote positive coexistence, volunteering and integration. These are the main functions of the public social services system, which serves almost 10 million people in Spain with an extensive network of professionals. The responsibility of regulating them falls on the local entities, the closest to the citizen. But not all municipalities invest the same. Alcalá la Real (Jaén) repeats as the town that dedicates the most to these services, almost 23% of its budget, according to the annual report of the Association of Directors and Managers of Social Services, an expert in the sector. Aranjuez is the least, with 4.4%. The analysis, published this Monday with data from 2021, establishes three categories to classify the social services of the municipalities: the poor (in the sense of deficient), the excellent and the poor. top social (the most prominent). Half of the poor municipalities are in the Community of Madrid.

“When a council invests less than 50 euros per inhabitant per year in these services, it means that these benefits do not reach its most vulnerable citizens,” explains José Manuel Ramírez, president of the association. Alcalá la Real and Barcelona, ​​at the top of the list, spend 255 and 235 euros per inhabitant, respectively. On the other hand, Aranjuez and Galapagar (Madrid), at the bottom, 31 and 34 euros. The 187 euros of San Roque (Cádiz), in the first positions of the excellent ones, multiply by five the investment of 35 euros per inhabitant in Mérida (Badajoz), for example.

The study, which is carried out for the sixth consecutive year, analyzes the budget paid by the 404 town halls of more than 20,000 inhabitants in Spain in social services and social promotion. In addition to the enormous territorial inequality, the authors emphasize that there are many municipalities that repeat in the ranking poor, “in an unfortunate example of the persistence of their corporations in supporting their neighbors with poor and underfunded social services.” 65% of the municipalities that are this year in the lowest group of the classification already were last year, such as Galapagar, Piélagos (Santander) or Puertollano (Ciudad Real).

This year there are 37 municipalities classified as poor, only two fewer than in 2020. This means that they invested less than 52.12 euros per inhabitant in 2021, which is the median expenditure last year of the 404 analyzed municipalities. The reasoning is an analogy to the statistics of the European Union, which consider a person at risk of poverty when they earn less than 60% of the median income of the rest of their country. In the Community of Madrid there are 19 of the 37 on the list. “Apart from the fact that some municipalities are not supportive despite being rich, there are communities like Madrid or Extremadura that spend little economic effort to finance municipal social services,” says Ramírez. The Madrid town halls have been repeating position at the bottom of the list since the studies began. The president of the association explains that, however, trends can change. Four years ago there were a large number of Valencian municipalities in the lowest category, but “the budget that the community has used and transferred to its local entities has meant that these municipalities have already disappeared from the list of poor people.”

The 37 poor municipalities in the ranking this year they served their two and a half million inhabitants with an average cost of about 45 euros per inhabitant, which barely represented an average of 5.2% of their total budgets. The group of municipalities analysed, in which 66% of the Spanish population lives, invested 3,354 million euros in social services last year, 10% of their total spending. Localities with an investment of 52 to 100 euros are not cataloged by the association.

Last year, 52 municipalities managed to meet the requirements for social excellence, compared to 28 in 2019. Andalusia is the community with the most excellent municipalities, 18, followed by Catalonia with 11 and the Valencian Community with eight. To be considered excellent, the town must meet four requirements: accredit spending of more than 100 euros per inhabitant during 2021, that the social services budget for 2022 is not less than last year, that social investment represents at least 10 % of the total municipal budgets, and that the information can be checked on the transparency portal of the municipal website. Some municipalities are not included in the list of excellence for not meeting one of the conditions. “The one in Segovia, for example, spends 180 euros per inhabitant per year, but when we verify through transparency the destination of the items, we see that there are many that are not for social services: aid for civil servants, bonuses for the police… ”, warns Ramírez.

Ramírez points out that, due to the needs derived from the coronavirus pandemic, the municipalities have borne the brunt of the burden and have invested in social services. “Now, with the crisis derived from the war in Ukraine, we have seen that most of the municipalities have maintained their budgetary efforts to be able to continue helping the most vulnerable people”, he points out. Even so, some towns have decreased their investment for next year. Morón de la Frontera (Seville) has reduced its budget for social services by 57%. Rojales (Alicante) has done so by 50% and Los Llanos de Aridane (Santa Cruz de Tenerife) by 43%. Among those who have increased it, Arteixo (A Coruña) with 115%, and the Valencians La Pobla de Vallbona and Requena, with 116% and 77% respectively.

Award for six town halls in the ‘top social’ category

The association wanted to recognize the work of six town halls that invest more than 200 euros per inhabitant per year in social services. They are: Alcalá la Real, with 255; Barcelona, ​​with 235; Esparreguera (Barcelona), with 221; Puente Genil (Córdoba), with 214; Villajoyosa (Alicante) with 209 and Moguer (Huelva), with 208. Practically at the entrance of the podium, Quart de Poblet (Valencia) has remained with 197 euros of investment, and La Rinconada (Seville) with 195. Eight of these municipalities have also repeated as excellent town halls.

Barcelona City Council allocated 11.8% of its budget to social services and social promotion in 2021, the largest item of all, just above security and citizen mobility. It invested more than 385 million euros, of the total of more than 3,253 of its municipal funds. To analyze another large city, the case of Madrid is different. The Consistory is left out of the list of excellent city councils, because it invests only 9.5% of its total budget in social services, almost 5,000 million euros. The expense item dedicated to this matter also decreased by 8% compared to 2020.