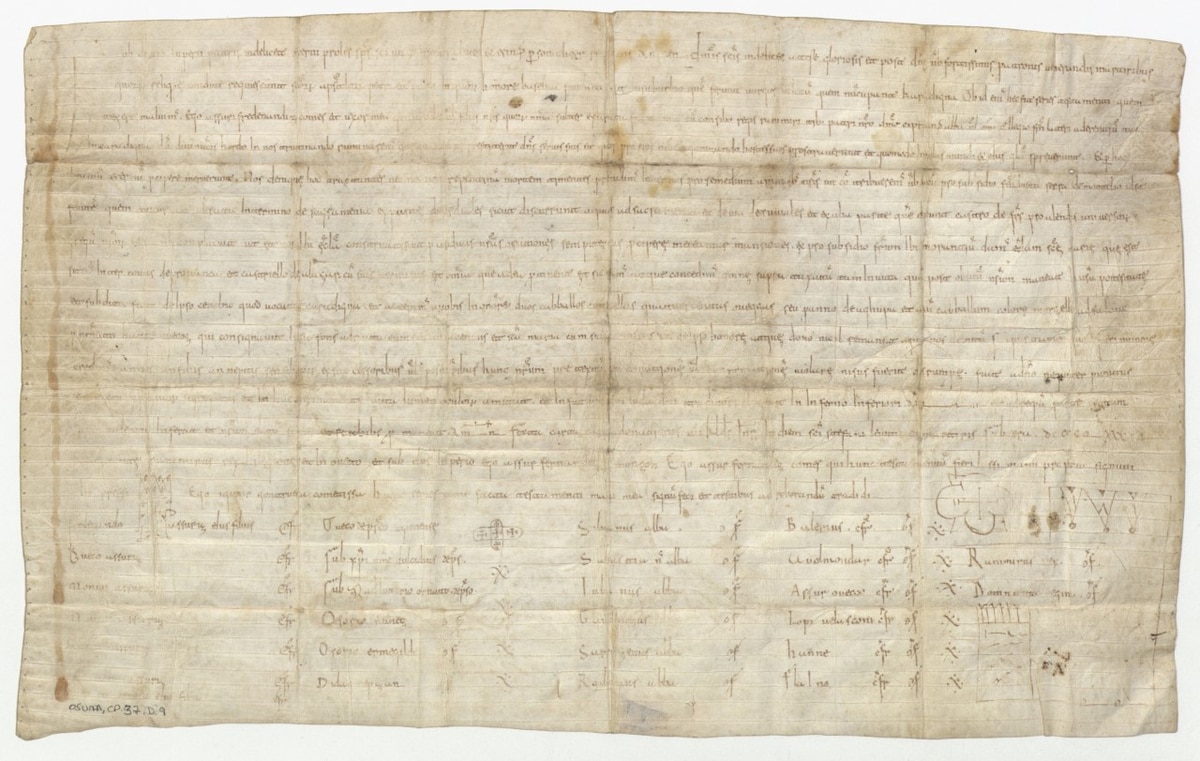 The monks of the monastery of San Pedro de Cardena (Burgos) They wanted at all costs that the church of Santa María de Cuevas de Provanco (Segovia), surrounded by precious vineyards, would become their property. However, the large donation that the Count of Castilla, Asur Fernández, and his wife Guntroda had made on his death made no mention of this Romanesque temple. So they decided, 200 years after the nobleman’s death, to forge the parchment of his will. But they made a mistake: they did not remove all copies of the authentic inheritance. Now him Higher Council for Scientific Research (CSIC) and the University of Burgos have been able to demonstrate that the fraudulent document ―the false transfer of the church to the convent―, until now considered the oldest of those kept in the Historical Archive of the Nobility, in Toledo, it is actually a forgery from the 12th century, and not from the year 943, as its date indicated.

The document rigged by the monks (officially OSUNA, CP.37, D.9) is a scroll written in round Visigothic script. It records a donation from the Count of Castilla to the monastery of San Pedro de Cardeña, which made it exceptional, because only original documents from the 10th century survive in Spanish. However, research has shown that it was made two centuries later, in the 12th century.

The investigation, which will be made public shortly in the Yearbook of Medieval Studies, He has revealed the procedures to falsify the parchment, as well as the reasons that led to its making. The forgers based themselves on an authentic donation from the count, which they reproduced by inserting elements that were not in the original, in order to use the parchment as evidence before possible future lawsuits over the ownership of the temple, which were finally held on two occasions. and that the monks won with deceit.

The parchment analysis, carried out by Sonia Serna, from the University of Burgos, has discovered anomalies both in the preparation of the page and in its writing. The expert explains that the forger scribe was accustomed to working with the typical Caroline handwriting of the 12th century, and that he strove to imitate the round Visigothic handwriting typical of 10th-century Castile. But anachronistic features crept into his work, such as the use of the Caroline system of abbreviations or the adoption of anomalous solutions to abbreviate some words, something that was not possible in the 10th century when the authentic one was supposedly written. Still, the forgery proved effective enough to play its part in subsequent church property trials.

The original document that the monk used as a model to carry out his forgery, analyzed by Julio Escalona, ​​from the CSIC Institute of History, was dated in the year 943, but it has been lost. However, a copy survived in the cartulario called Gothic Calf of Cardeña, which is kept in the Zabalburu Library, in Madrid. By comparing both texts, Escalona verified that the false document imitated the wording and appearance of his model, but strategically inserted a clause that assigned ownership of the church of Santa María de Cuevas de Provanco to the monastery of San Pedro. This clause did not exist in the initial cartulary.

The church of Santa María de las Cuevas was the subject of a dispute between the monastery of Cardeña and the councils of Peñafiel and Castrillo de Duero in 1175. The Burgos abbey finally won the lawsuit by presenting the false document that proved its rights, in addition to the fact that two monks they swore it was authentic. “That document was undoubtedly the parchment from the Toledo archive, whose anomalous paleographic features are consistent with an elaboration in the second half of the 12th century, taking the original from 943 as a model,” the researchers maintain.

Research has also shown that OSUNA,CP.37,D.9 is the same document with which the Cardeña monastery defended its interests in court in the 12th and 13th centuries. “Its value does not reside in the anecdotal data of being or not the oldest document in the archive [como se creía hasta ahora], but in showing how technical skills and moral and religious authority were combined in this case to build a credible truth, capable of triumphing in a judicial scenario. Ultimately, he reminds us that in order to fully understand any historical period it is essential to understand how each stage rewrites and manipulates its past”, according to the study by the CSIC and the University of Burgos.

the monastery of San Pedro de Cardena, where the forgery was made, it was completely plundered by Napoleonic troops during the invasion of the peninsula from 1808. The monks fled in terror before the arrival of the French Army and had to abandon all the treasures they had treasured for centuries. Napoleon’s soldiers looted, for example, the tomb of El Cid, who rested in this monastery, and distributed his precious weapons and bones throughout Europe at a good price. They even made proud engravings that reflected the looting of the tomb of the mythical Burgos warrior. Today, a plaque ensures that, although the remains of the Castilian hero do not remain, Rodrigo Díaz de Vivar’s horse is buried in the convent’s garden. Possibly it is false or a legend, such as that the church of Santa María de las Cuevas belonged to the convent. Who knows.

All the culture that goes with you awaits you here.