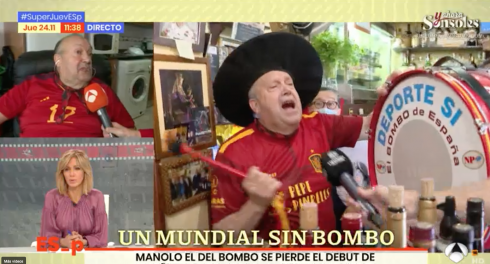 HE’S been Spain’s most famous football supporter for more than 40 years, but it looks like Manolo ‘el del bombo’ won’t be going to the Qatar World Cup to noisily cheer on his favorite team.

Manuel Cáceres Artesero, to give him his real name, is ‘the one with the drum’: the beret-wearing former bar owner who has been a pitchside fixture at Spain games for decades, and is known for his distinctive beret and large drum that he bangs with great enthusiasm to the delight of other fans.

Manolo was due to travel to Doha this week to see Spain’s first match, against Costa Rica on Wednesday. The Spanish Football Federation had bought him his plane tickets and he’d even purchased a new drum. But then tragedy struck.

‘I’m very sad because I had everything sorted out and two days before I left they told me that I have to have a hotel booked,’ he told the Espejo Público TV show on Spain’s Antena 3 channel today.

He added to the chorus of voices that has already criticized the organization of the Qatar World Cup, with widespread complaints about the lack of accommodation and the poor quality of the rooms that are available.

‘What I want is to be there with my boys and my fan of the Marea Roja,’ he said, citing one of the Spain team’s nicknames.

But for Manolo, all might not be lost: the Federation has told him that if Spain gets to the semifinal of the tournament, they will give him tickets and also pay his hotel.

After Spain trounced Costa Rica 7-0 on Wednesday, Manolo may still get to bang his drum pitchside after all.