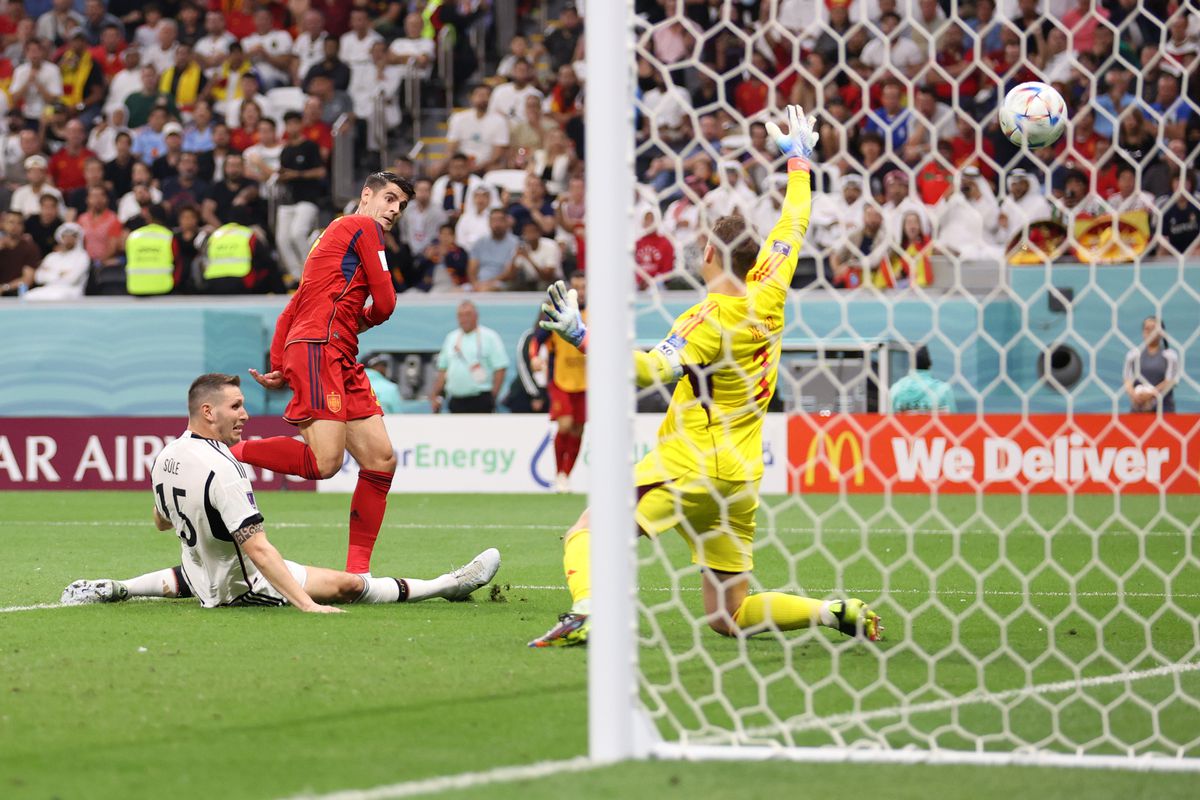 From a game with a lot of substance, Spain came out one foot from the round of 16. La Roja, forced by a Germany with substance, sang a draw that will allow them to overcome the round even if they repeat the result against Japan on the 1st. Even a defeat would help them if Costa Rica does not overcome the Germans and there are no thunderous thrashings Japan and Germany itself. Meanwhile, in Jor, Füllkrug, a scholarship holder with three caps, matched Morata’s previous goal. Two substitutes as scorers in a very competitive match, a duel with a lot of packaging until the end, with a looser Germany in the last stretch, with more cut for Unai than for Neuer.

Germany devised a very tight game for Spain. Individual arrests for Busquets (Gundogan), Pedri (Kimmich) and Gavi (Goretzka). The situation forced the two Barcelona cadets to maneuver with their backs to Neuer’s goal. Hansi Flick’s team invaded Spanish territory ruthlessly, forcing Luis Enrique’s men to clinical precision to articulate the game his way, without hitting the ball. For this, the help of Unai Simón with his feet was required on a regular basis.

In case of exceeding the German partition, only Dani Olmo sought an evacuation route. Thus came the best symphony of the Red. The Spanish team subordinated passes and more passes, all chatting with the ball, until Dani Olmo lined up and put Neuer into the air, the best Neuer, the one capable of tapping the ball that was going to his left corner and deflecting it to the crossbar . A great play, a magnificent shot and an extraordinary save. The appointment promised.

Luis Enrique gave reel to the format of the premiere against Costa Rica, with the only replacement of Carvajal by Azpilicueta. Rodri remained central and Morata repeated on the bench. What works cannot be touched, the Asturian coach must have thought. The same one that took time to rectify the initial enclave of the three forwards. Olmo stopped being the nine and swapped with Asensio. The Leipzig player was on the left and Ferran on the right. It was not the night of the Barcelona player, confused and with his boots backwards. A phalanx from the goal, he fired a shot into a corner of the upper stands of the imposing Al Bayt stadium. Olmo had sprinted offside, but Ferran did not find out until the VAR breath. Luis Enrique warned that it was not the night of his relative and as soon as the second stage began he played Morata. Bingo was coming up.

At Olmo’s warning to Neuer, Gnabry responded with a cross shot after a clearance by Unai Simón that almost cost the Basque goalie a blow. The same thing happened to him in the second period after a disagreement with Pedri. He redeemed himself with an effective intervention against Kimmich.

The match was very even, the most demanding for both teams. A height challenge for two formations with the same chair: pampering the ball above all else. There is a reason for players like Busquets, Pedri, Kimmich, Gündogan to sign up… And for a reason, both of them are highly regarded, both made an effort to neutralize each other in the midfield cabinets. In front, two main agitators: Dani Olmo and Musiala, 19 years old, by far the best German project of the moment. Fine footballer, skillful in fencing challenges and with a keen eye on all the derivatives of the game. His presence demanded the most applied Carvajal. On the other shore, Jordi Alba did not hesitate to face Gnabry, another ferrari. One of his adventures culminated in a shot from the left-wing side with the right that made Neuer snort. The same thing that all of Spain was relieved when the VAR almost instantly revealed Rüdiger’s misplaced header to Unai Simón’s net. All very balanced. A great duel for both of them. Any oversight would be fatal in such a tight crash.

Just after the hour, Jordi Alba opened the gas again after a tie between Busquets and Dani Olmo. The Catalan winger pointed at Morata and assisted him with the precision of a surgeon. The triumphant shot from the Atlético striker was even better than Alba’s accurate serve. Morata burst the net with a running touch, with the immense Süle at the neck and the solemn Neuer in front.

The goal against Germany did not break down, which never lost sight of the horizon of Unai Simón, decisive against Kimmich and against Musiala. He pressed and pressed Flick’s box when it was time for Füllkrug, one of those German strikers of a lifetime, those with four bodies. Musiala scrambled with Rodri as a sentinel and when he was going to set up the shot, his rookie colleague swiped the ball from him and smashed it violently into Unai’s net. Füllkrug arrived at the World Cup on the rebound and on the broom truck. If Timo Werner had not been injured, it is most likely that he would continue the tournament from Bremen. He has three caps and made his debut in Oman a few days ago in the last German friendly before landing in Qatar. Rodri still had to clear a spicy play by Sané in overtime. Spain breathed, a good Spain that has the round of 16 within reach.