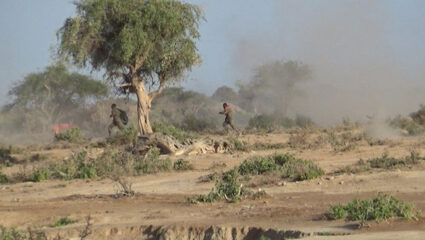 New Delhi. According to the big news coming from Somalia, the army here has killed 100 terrorists of the terrorist organization Al-Shawab by conducting a major air strike in the Central Shabelle region. 12 commanders have also been killed in these. Be aware that the main objective of Al-Shabaab is to root out the Somalian government formed in 2017. Along with this, this terrorist organization has also carried out 3 major attacks in the last 4 months.

According to the information received, Somalia’s army has launched a military operation in Shabelle region. In this, 100 terrorists including 12 commanders of al-Shabaab have been killed. Actually, the army had received the news that these terrorists are now going to launch a big attack on the big government officials and army of Somalia. Along with this, according to the input, its preparation was also completed.

At the same time, to stop this attack, the army did an air strike. The army has recovered many weapons from them. It is worth noting that a few days ago these terrorists of Al-Shabaab entered into the Hyatt hotel and opened fire, in which 8 people were killed and 9 were injured. At the same time, in the year 2019, 10 terrorists of the same terrorist organization Al-Shabaab were killed in an air strike by the US Army and its allied forces in Somalia.