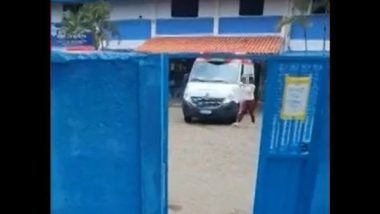 This content is about a fact that is still being investigated by the newsroom. Soon we will have more information.

Shooting attacks at two schools in the city of Aracruz, in Espírito Santo, left three dead and at least nine injured this Friday (25). The shooter – whose identity has not been revealed – entered a state school and fired several shots in the teachers’ lounge. Two people died on the spot.

Afterwards, he fled by car and went to a private school. There, he shot five people and one of them died, according to the g1🇧🇷 He was still being sought this afternoon.

The governor of Espírito Santo, Renato Casagrande (PSB), said that the security forces are committed to resolving the case. “With a feeling of regret and great sadness, I am closely following the investigation into the invasion of the Primo Bitti and Darwin Schools, in Aracruz. All our security forces are engaged. Determine the displacement of Sec. of Security and Education to accompany the work”. Later, Casagrande corrected the information about the name of the second school and said that it was Centro Educacional Praia de Coqueiral.