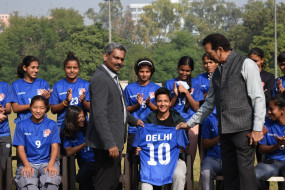 Digital Desk, Thiruvananthapuram. The Senior Women’s National Football Championship (NFC) is going to start in Kerala from 28th November. Some 32 teams, divided into eight groups, are participating in the tournament and all matches will be played at the Municipal Stadium, Koothuparamba, EMS Corporation Stadium, Kozhikode, Calicut University, and Calicut Medical College.

The winners of the qualifying matches will play the semi-finals, with the two winners of the last four advancing to the final. The Football Delhi selection committee named midfielder Deepika Venkatesh as the captain of the Delhi team for the tournament.

Last year, Delhi captain Jyoti was ruled out of the team due to an injury sustained a day earlier. This is the first time since 2009 that she will not be a part of the team. Delhi, included in Group D along with Jharkhand, Karnataka and Goa, will begin their campaign on November 29.

Football Delhi President Shaji Prabhakar said, “Our women players have worked hard in the coaching camp and these players are getting a chance to play in the national championship after a gap of two years. This will surely motivate the girls and help them to improve their game.

The groups are as follows-

Group A: Manipur, Daman and Diu, Pondicherry and Meghalaya

Group B: Railways, Chhattisgarh, Dadra and Nagar Haveli, and Tripura