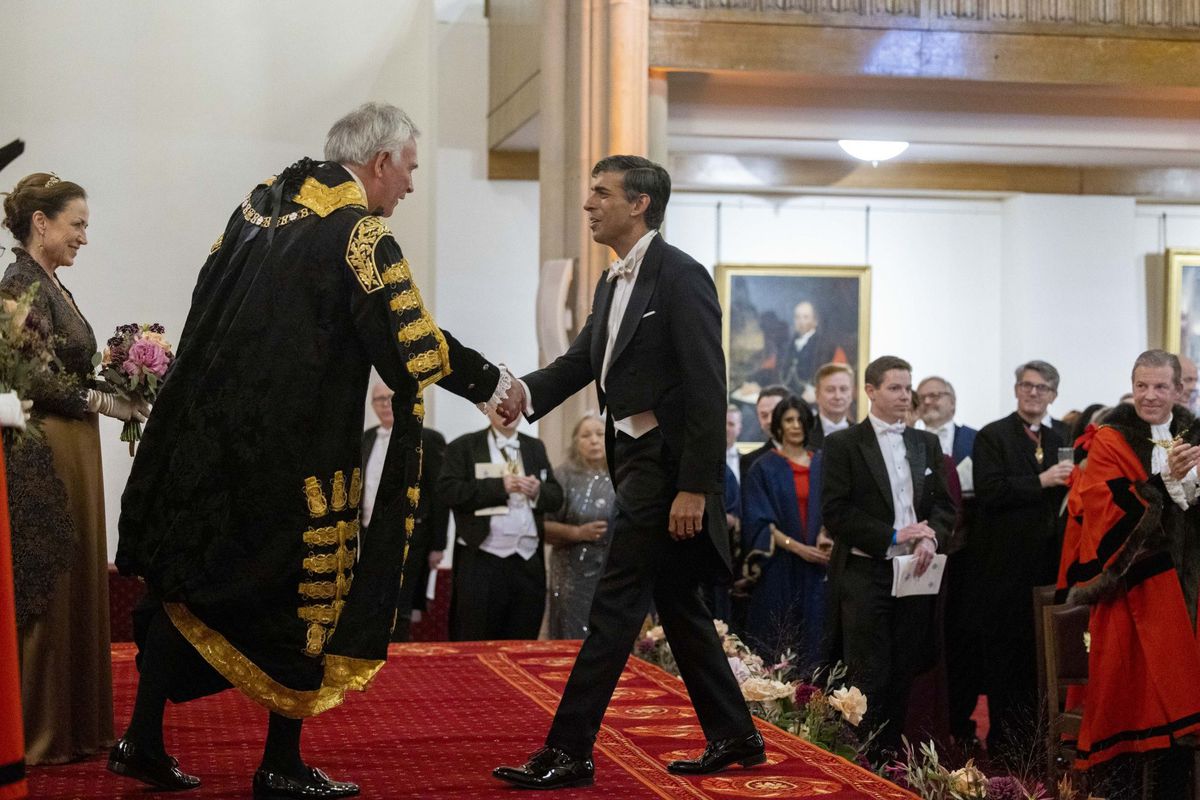 Rishi Sunak practices a constant balance since a month ago he became the new Prime Minister of the United Kingdom. He must send constant signals to the Conservative Party and its voters that he has not abandoned the ideological rhetoric of his predecessors in office, Boris Johnson or Liz Truss, while displaying the pragmatism and common sense with which he convinced his peers. tories for them to rise to power, in an electoral survival maneuver. He did it again when he presented his government’s strategy on Monday night regarding the growing international challenge posed by the authoritarian regime of Chinese President Xi Jinping. It was the first speech in which Sunak presented his vision of international politics, at the annual dinner celebrating the city London – the financial center of the country – in the Guildhall, the building where the administrative and municipal power of that district is concentrated. The ‘Lord Mayor’s Banquet’, which bids farewell to the outgoing mayor and welcomes the incoming one, is the traditional occasion for the prime minister to present his worldview to international businessmen, financiers, politicians and dignitaries.

“We recognize that China poses a systemic challenge to our values ​​and interests; a more intense challenge the further it moves towards greater authoritarianism. Instead of listening to people’s protests, the Chinese government has chosen to harshly suppress them, including in its attacks on a BBC journalist,” Sunak charged. He was referring to Ed Lawrence, the British public broadcaster detained in Shanghai on Sunday, during protests by the population of that city against the strict confinement measures imposed by the Beijing government.

Carrot and stick speech. The new prime minister charged against the ingenuity displayed more than a decade ago by the Government of David Cameron and his Economy Minister, George Osborne, who opted for a privileged economic relationship with the Asian power. “Let’s be clear. The so-called ‘golden era’ — Osborne was speaking in those terms at the time — has ended, as has the naive idea that trade would bring social and political reforms with it,” Sunak said. “But neither can we resort to simplistic Cold War rhetoric,” the new Downing Street tenant qualified, to justify his own deviation.

If during the Conservative Party primaries last summer, when Truss managed to win, both candidates used a harsh speech against China and promised to define the country as a “threat” in the Revised National Security Strategy that the British Government publishes every year , Sunak has now opted, as head of government, for a more measured speech that will help him avoid burning the ships. “We cannot simply ignore China’s importance in world affairs, from global economic stability to combating climate change. The United States, Canada, Australia or Japan also understand this reality, and for this reason, together, we will manage this very acute competition, through diplomacy and compromise”, the Prime Minister qualified.

This “robust pragmatism”, as Sunak’s team defines its approach to China, which means, for example, confirming the ban on a company like Huawei participating in the deployment of 5G technology throughout the United Kingdom, does not convince the wing hardest of the Conservative Party, which has come to compare any sign of rapprochement with Beijing with the appeasement practiced in his day by Prime Minister Neville Chamberlain with the Nazi government in Germany. “You can’t claim a strong position if you want to do business with them at the same time. They see it as a weakness, ”said Ian Duncan Smith, the deputy and former leader of the Conservative Party who represents the internal group of the toughest formation in its criticism of the Jinping government. “For many years, the free world has looked the other way at the authoritarian abuses unfolding in China. If we learned anything in the 1930s, it is that the more you try to appease dictators, the more you get into dangerous waters”, Duncan Smith accused Sunak, whose rhetoric regarding Beijing – “systemic challenge” – is limited to replicating that used by the American administration of Joe Biden.

Join EL PAÍS to follow all the news and read without limits.

Sunak has clung to the cooperation deployed in Europe against the aggression of Russian President Vladimir Putin, in Ukraine, to defend a new relationship with the EU that, beyond that conjunctural alliance, has not fully taken off. Above all because, if behind one of his shoulders he watches the pressure of the conservative front opposed to the Chinese government, behind the other he cannot neglect the Eurosceptics, ready to show their fangs if they also notice -they too- any gesture of appeasement towards Brussels. “We are moving towards broader relations with Europe in the post-Brexit era, which include bilateral engagements and our involvement in the new European Political Community. [el foro impulsado por el presidente de Francia, Emmanuel Macron, para discutir el futuro estratégico y de seguridad del continente]Sunak said. “But this does not suppose a greater alignment. Under my Government, we will never align ourselves with EU law. In return, we will promote respectful and mature relations with our European neighbours, based on shared interests such as energy or illegal immigration, to strengthen our collective resistance against strategic vulnerabilities”, promised the prime minister. In recent weeks, it has had to be used to calm the fears of the hardest wing of the Conservatives, convinced that the calamitous state of the British economy – caused largely by a Brexit that has been a failure to date – will lead the current government to reconsider a new relationship with the EU.