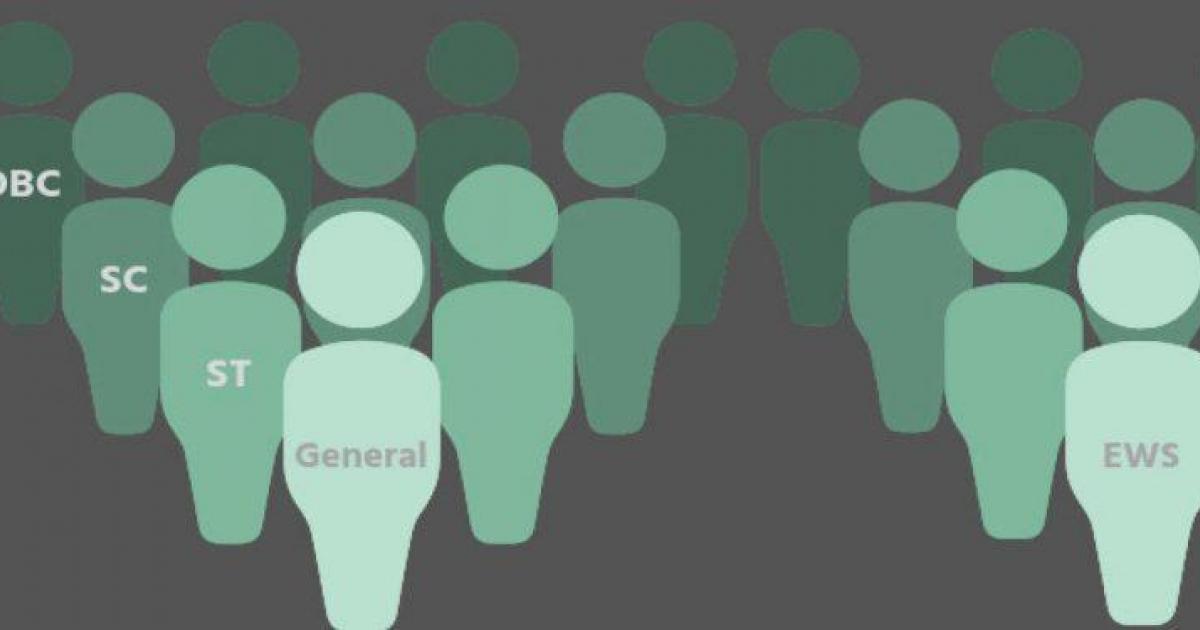 Whenever the talk of caste, caste violence and caste discrimination starts in our country, it reaches to reservation and ultimately the historical oppression of such a large section of the public disappears from the discussion and the whole issue is reduced to reservation vs rights of the poor. is converted into Newspapers are filled with news of caste violence daily, but when discussed, people dismiss caste itself and it is argued that the circumstances have changed now. By giving examples of some Dalits occupying high positions, an attempt is made to prove that everyone has become equal. Then some poor people from general castes and they are made to stand face to face. Normally, in this whole process, the whole cruel system of caste is ignored in a very convenient way.

As a result, a big discussion is being deliberately propagated in the society that the basis of reservation should be economic so that all the needy get its benefit. In caste reservation, all the needy do not get its benefit. However, it is forgotten that the persons taking advantage of caste reservation do not have to be victims of caste discrimination. In this way, under the constitutional compulsion in our country, an attempt is made to hide the true purpose of affirmative action in the form of reservation and also the truth of the caste system.

The main weapon of discrimination and exploitation in our country’s society is caste and its form is different from other countries. Caste is not only a means of discrimination here, but it is the basis of Hindu society and it not only ensures but also justifies the grossly unequal distribution of resources and power in the society. In fact, Shudra and Atishudra are not a part of the Chaturvarna of the Hindu society. The purpose of this article is not to explain the caste system, but to bring Dalits and Adivasis, who were pushed to the fringes for thousands of years, in the main stream of the society, because of this system, the attack on the provision of constitutional reservation is being done. to discuss.

The first thing is that only reservation will not empower the Scheduled Castes and Scheduled Tribes, but for this many other efforts also need to be done along with reservation. Second, the purpose of reservation is not just economic empowerment. Reservation is a multidimensional effort in which the representation of the deprived sections increases in education and government employment. The benefit of reservation is not limited to the beneficiary only, but also reaches the rest of the family and community and opens closed doors for them too. When people from marginalized castes reach policy making, more inclusive policies are made. The long-term objective of reservation is the individual and collective social upliftment of the beneficiary. Social equality is an important goal because caste discrimination not only deprives the deprived castes of resources, it also results in social slavery.

Therefore, the advocates of economic reservation should understand that reservation is not a poverty alleviation program whose objective is to remove poverty of individuals or families. There is no need to give any example for this that the deprived castes get economic benefits from reservation, but for social equality, a long process will have to go through. Don’t we know that there are many caste prejudices among their subordinates towards Dalits working in high positions. Economically sound Dalit students and teachers also have to face caste discrimination in higher educational institutions of the country.

Before proceeding further it is necessary to make it clear that I am not against 10% reservation for economically weaker sections. We believe that poverty should be eradicated from the society and due to lack of resources, poor families lag behind in education and then get out of the race for employment. So they need an extra helping hand (affirmative action) to move forward. But even while supporting it, it becomes very important to firmly reiterate the correct concept of the provision of reservation present in the constitution.

Consider the reaction of the citizens, media and intellectuals of our country to the implementation of the 103rd amendment of the constitution in 2019 by the government and now upheld by the Hon’ble Supreme Court. Only the casteist face of our society will emerge. Our newspapers and television channels do not miss a single opportunity to start a discussion against reservation, it is a different matter that the news of caste violence and discrimination never becomes their headlines. Many intellectuals in the country firmly take their stand that they are against reservation in principle. He presents as if he is against all kinds of reservations. There were fierce and violent protests across the country when the Mandal Commission was implemented. Many organizations like ‘Youth for Equality’ were formed in many educational institutions of the country and are still working today. But there was no opposition to the implementation of reservation for the economically weaker sections. The theorists who oppose reservation to the principle of equality are happily sitting quietly.

Now no one is worried about the so-called merit. However, ever since the EWS reservation came into force, there have been many instances where students from OBCs with less marks in the entrance examinations have been admitted to educational institutions. But where are the Dronacharyas who are concerned about merit missing? No hashtag was trended even on social media. But why? Because when reservation is for dominant castes then everything is fine. But if the toiling but deprived castes of the country get their share, it shows disrespect to merit. This is amazing hypocrisy.

Although the Yaksh question is also that till date the courts have never allowed the reservation quota limit to go above 50%. In a way, after the case of Indira Sahni and others vs Central Government, it was established that it is not only possible to increase the reservation limit above 50%, but in the present case, the Supreme Court not only overturned everything, but also gave a very unique explanation. Of.

Earlier very strict criteria were adopted to implement reservation. The courts also had the same attitude. For example, if a caste has to get the benefit of reservation for the Scheduled Castes, then it should be fully tested that the caste is extremely backward. There are various criteria for this. This must be supported with concrete evidence that the group so identified is historically disadvantaged and suffers from under-representation, which is significant enough to warrant reservation. But neither the government nor the Supreme Court laid down any such strict condition while implementing the reservation for EWS. However, it also appears that it is not meant for the economically backward. To take advantage of EWS reservation, the annual limit of 8 lakh or 70 thousand monthly income tells a lot. If the person earning 70 thousand rupees per month is poor, then what will we call those crores of people whose monthly income is less than 15 thousand rupees. The average income of citizens in the country is Rs 1.5 lakh per annum and income tax has to be paid on an annual income of Rs 2.5 lakh. The eligibility conditions for EWS reservation are completely baseless. By the way SC/ST reservation is strongly criticized by the contractors of the society that poor Dalits and tribals do not get its benefit, but in the name of EWS, these so-called rationalists have sealed their lips on direct reservation to the economically affluent class from among the upper castes. went . Even if you have got the legal right to kill others even in education and employment.

Exclusion of poor Dalits, Adivasis and OBCs from the EWS quota is also a matter of deep concern. There is no need for any research for this that those who have been deprived of education and resources and have been filled with social inferiority, they will be the poorest. When the basis is economic, then why discrimination on the basis of caste. Although the majority decision of the Supreme Court bench has argued for classification in gold castes, but it does not seem very convincing. According to the Sinho report, only 5.4 percent of the poor come from general castes, then why 10 percent reservation for them?

Historically, the purpose of reservation is to create an equal society by removing social and economic backwardness and inequality arising out of historical discrimination. In our country, this discrimination has not happened with individuals but with caste-like social groups. Hence the identity of a person has become his caste. For this reason, caste is identified as the beneficiary of reservation to end inequality and exploitation. In contrast, EWS reservation explicitly emphasizes individual economic status, which is not linked to social group identity. There is also concern that this EWS reservation decision will usher in a fundamental shift in the policy of group-based reservation to make it individual-centric. Simply put, constitutionally the basis of reservation is caste and not economic. Looking at the present environment, there are more dangers that economic aspect will be given priority over social caste for the basis of reservation in future. The way Manuwadi thought under political patronage in our country is openly attacking the constitution to re-establish casteism, this trend that started with EWS reservation seems to be moving towards the end of caste reservation. On the one hand, caste is being firmly rehabilitated, which is reflected in the increasing attacks on Dalits and Adivasis, and on the other hand, the exercise of ending reservation is going on.

This is a matter of deep thought, but in view of the economic and social policy of the government at present, the whole process seems redundant. The above discussion is important in its place, but when it comes to implementing the entire reservation policy, we find that due to widespread privatization in the country, public institutions are few and far between. Where will you get reservation when public institutions will not survive. The condition is such that in the field of higher education the fees have become so high even in public institutions that despite reservation, students are not able to complete their studies. In the private sector, the question of reservation or any kind of affirmative action does not arise. Here, seeing your caste, you are made to sit outside.

Therefore, while there is a need to fight to protect the right concept of reservation, there is also a need to fight continuously against the economic policy of the government which is killing opportunities for the underprivileged through privatization. This battle of social justice will have to be fought on both the fronts. The Dalits, Adivasis and other backward classes who form the bulk of the toiling masses will not have to give up their share in education, employment and resources of which land is the most important at any cost. Whether for this a priest or even Lord Manu himself comes and teaches him salvation by following the caste system. Salvation of the working class will be possible only through struggle and this is not possible without the fight for social justice. The rulers of the country will do all kinds of tricks to break our unity. The BJP has become efficient in winning elections even among Dalits by pitting one caste against the other. The issue is simple, according to the representation in the society, according to the resources and politics of the country, that much share should be there. Caste census is necessary for this.

(The author is Joint Secretary, All India Agricultural Laborers Union. Earlier he was associated with the student movement. Views are personal.)