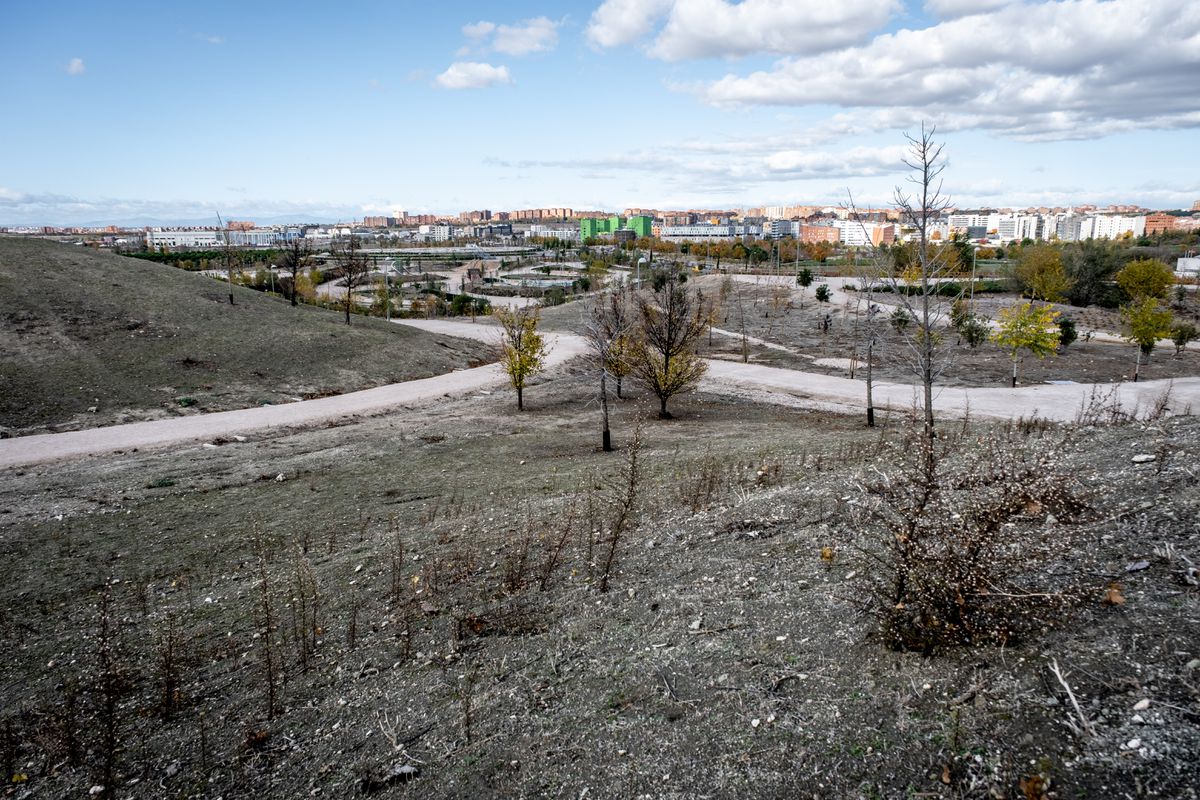 There was so much interest in this park that nothing was done for 12 years. 10 kilometers from Puerta del Sol is La Gavia, in the Ensanche de Vallecas. This corner of the south of Madrid already has more than 50,000 residents since the first thirty-somethings arrived there in 2006. The enclosure has 36 hectares ―the Retiro park has 125 and the Casa de Campo, 1,700―, distributed among large meadows and highlands of land that, from 2016 to November 29 of last year, were carefully measured and thought out. Innovative playgrounds. Sports tracks. A space for water in the center. A street runner for dogs. The illusion came to the neighborhood. There was no longer any trace of that 2003 project that indicated that the whitewater tests for the Madrid 2012 Olympic Games were going to take place in these parts. Times of eternal utopian promises. This huge lot, which once housed a landfill decades ago, was finally converted into a public park in 2021. A year later, the state of the place leaves much to be desired. There are children’s play areas that have been closed since July. There are dry trees. There are damaged irrigation areas. There is an auditorium full of ferns and bushes, useless. There are broken bins. There are dry holes everywhere. Nobody understands anything.

José Luis Martínez-Almeida’s team proposed a year ago the inauguration of the park at full speed, with some areas half finished and without a maintenance contract. Coincidence or not, the morning of that Monday, November 29, was also the funeral of the Madrid writer Almudena Grandes. Almeida was absent from her funeral, according to what she said, for scheduling reasons: she had to inaugurate this park.

The PP did not invite the rest of the municipal groups, despite the fact that Más Madrid was the one who really promoted and signed the project during the mandate of Manuela Carmena (2015-2019), nor the PSOE, nor Vox, nor the Mixed Group. Neither to the neighborhood associations, nor to the groups that had contributed their ideas for the park. Everything went very fast. Very measured. Photos. Videos. Institutional statement. Inaugurating is a verb that pairs alone in politics.

Surrounded by cameras, Almeida even crossed the park’s water area. To the surprise of journalists and photographers, he skipped over circular islets of concrete, as if he were a test run from the Chinese test video show, Yellow Mood. Almeida’s images reached all WhatsApp groups immediately.

Minutes later, smiling, he spoke to the media: “Today we are inaugurating La Gavia Park, which is one of those enclaves in Villa de Vallecas and which will allow us to improve the quality of life and well-being of all neighbors in the area”. There was so much desire to inaugurate it that five of the six access doors were closed. The neighbors did not understand this type of inauguration.

The mayor, knowing that it is an area with many children, had an impact: “There are 40 hectares with playgrounds for children, with a budget of more than 17 million euros [aunque se presupuestó realmente en 21] and the deadlines have been met.

And he left a phrase that users do not stop remembering: “This is going to become a green lung of reference in the southern zone. For us it is the same, and it is extraordinarily important, that whatever the place of residence in the city, one has the same opportunities and facilities. The residents of Villa de Vallecas are going to have a new green lung”. A year later, the green lung is already brown and begins to dress in black.

There are signs that say: “Facility under repair. Out of use. Sorry for the inconvenience.” Meters and meters of marked areas with white and red ribbons. Rabbit feces. Abandoned irrigation areas. What’s more, 300 fewer trees were planted than those stipulated in the bidding contract. If the park anticipated 2,631, it opened with 2,326. Nobody gave explanations. Of these, according to the complaint by the Regional Federation of Neighborhood Associations of Madrid (Fravm), around 300 have already been left to die.

Evidence that is recognized during a morning walk even by the workers of the municipal Environment area who, without being quoted, affirm that the care can clearly be improved. La Gavia adjoins the Atalayuela park, but instead of bidding for a maintenance contract as a whole, two different ones have been tendered. For having, there is even a fence that separates both parks and that the residents themselves have had to break with their hands so that they can cross both and play sports without restrictions. Here is even an open-air auditorium that in theory was going to be for cultural activities and that is completely deteriorated. There is not a single public bathroom in the entire compound.

“It is absolute neglect,” says the spokesperson for the Ensanche de Vallecas Neighborhood Association, Rosi Pérez. “This was one of the attractions of the neighborhood,” says Enrique Villalobos, a neighbor and president of the Fravm. “It was a demand of ours that came from 2004. It cannot be that fewer trees are planted than expected. It can’t be that it doesn’t water. It can’t be that everything dries up. They think that since this is Vallecas… ”.

The park has a hill full of swings designed with 300 tires from an illegal dump that was next to the park. It has been closed since last July. The playground was built by the environmental collective Basurama. Since its inauguration in November 2021, it was one of the most visited areas every afternoon. It was filled with parents and children. Nobody goes anymore.

“No one told us that they had broken,” Alberto Nanclares, a spokesman for Basurama, recounted by phone. “No one from the City Council has written or called us for anything, not even for the inauguration.” These play areas cost around 80,000 euros and have a one-year warranty. Upon learning that the park was marked out and as long as the children ran around again, one morning they showed up there themselves with drills and tools.

The maintenance staff told them to leave immediately, that these were not manners. Nanclares then sent an email to the City Council, to which this newspaper has had access, but there has been no response either. Some time later they found out that even the pieces had been dismantled: “We don’t know where they are. This is an incredible thing. Vallecas is allowed to die just because. They are not maintaining anything, they are dismantling everything a year later.

Unanimity in terms of criticism has also reached municipal groups. “It’s embarrassing. The residents of Vallecas do not deserve it ”, says Rita Maestre, from Más Madrid. “This requires rapid municipal intervention.” The same points out Mar Espinar, from the PSOE: “We are facing the usual problem. The neighbors raise their voices and the government denies the biggest”.

This Friday, the mayor of the Environment, Borja Carabante, responded in an appearance with questions that they are going to prepare an internal audit in the coming weeks, without specifying the exact date, to check if the contractor is failing to maintain the park.

And, to questions from the press, he announced a promise: “In June of next year there will be a new contract for La Gavia with a budget that will increase by 45%.” The fine print is that La Gavia was not part of the unique parks in Madrid, such as El Retiro or Madrid Río. Villalobos, president of the neighborhood federations of the capital, has his own thesis: “In Vallecas we like jabugo ham the same as all Madrid residents. If this park were in the Salamanca neighborhood, everything would be arranged at the moment”.