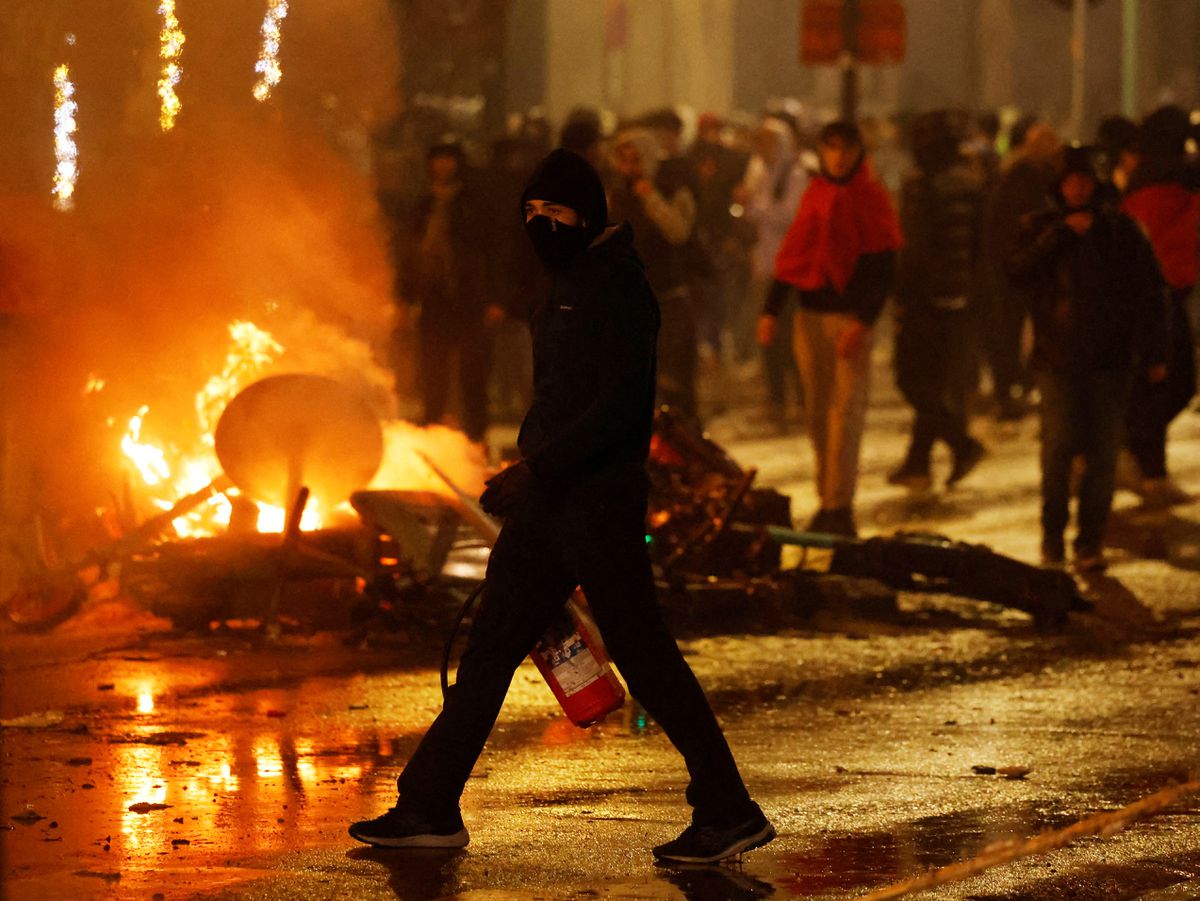 Just after the match between Morocco and Belgium played this Sunday in the World Cup in Qatar, riots began in the center of Brussels, as well as in the Dutch cities of Amsterdam and Rotterdam. Not even an hour had passed when groups of young people with Moroccan flags overturned at least one car, burned street furniture and rented scooters. The police, for their part, charged and deployed tanks with water cannons and police charges. After two hours, the Belgian authorities announced the arrest of a dozen individuals, according to the local press.

In Rotterdam, a group of about 500 young people, fans of the Moroccan team, threw glass and fireworks at the police, reports Isabel Ferrer. In Amsterdam, several buses and trams had to change their route in the eastern district, after fires broke out on the road. There were also firecrackers thrown, and at least one car was set on fire. In The Hague, other supporters opened the doors of cars driving down the street. When the situation escalated, the agents intervened to separate the people, according to their spokespersons. In the Netherlands there is a community of Moroccan origin totaling some 420,000 citizens, of which 60% were born in the Netherlands.

In the Belgian capital, the downtown merchants had been warning since the day before in the local press that this could happen: “Whatever the result, we expect scuffles.” And, in fact, before the game ended, the police had already deployed their device with units of riot agents, a surveillance helicopter and the usual water tanks that can be seen in the Belgian capital. However, the deployment did not prevent the riots from starting once the meeting was over. The altercations do not appear to be due to a clash between fans, but to vandalism and clashes with the police.

As soon as the day was over, many rockets were heard and many young people with Moroccan flags were seen in the streets. Immediately afterwards, riots began in the Lemonnier boulevard area. In the images posted on social networks, you can see the burning of street furniture and scooters, and even an overturned car from a car-sharing company. The riots reached the area of ​​the Christmas market and the Grande Place. However, in that area the police protected the entrances to prevent riots from reaching there.

“I condemn in the strongest terms the incidents this afternoon. The police have already intervened firmly. Therefore, I advise followers not to come to the city center. The police use all their means to maintain public order ”, he declared on Twitter the mayor of the commune of Brussels, Philippe Close. The clashes caused a huge traffic jam both in the center of the city and in the adjacent neighborhoods.

In other communes of the capital there was also tension as soon as the game finished. Although not of the intensity of the center. In Molenbeek, where there is a large Moroccan community, which in some points reaches 80% of the population, there was a threat of violent clash minutes after the final whistle, when a group of young people approached the commune police station and broke a crystal. When the so-called “guards of peace” arrived, also of Moroccan nationality or descent, the situation calmed down.

Everything became entangled by late afternoon.

The festive atmosphere of a few hours before disappeared. After one in the afternoon, in this commune of 97,500 inhabitants, of whom almost half were born outside of Belgium, many Moroccan flags were visible. It was a special day for a neighborhood that has lived with the stigma of jihadism since November 2015. The terrorists who attacked Paris at that time left here, as well as those who did so months later in Brussels itself. A day like this could only have been lived before in 2008. When the previous clash between Morocco and Belgium was played. A friendly that ended four to one, with victory for the Moroccans.

In the communal square the market was still unfolding: open stalls and women buying. A few steps further, in Le Nieuw Royal, Feti was walking with her children, Sami and Rami, aged 11 and seven. The eldest wanted Morocco to win; the little one, more talkative and with a Cristiano Ronaldo haircut, Belgium. They were not going to enter the tea room. They were going to a more private place, but also a commercial one.

It is not easy to enter. Not a pin fits, but the waiter makes room for them. He asks in a low voice: “Who are you going with?” He smiles and opens his jacket a little to reveal a Belgium shirt. He’s the only one on the premises in this outfit. The shirts, caps and flags are Moroccan. Until the 72nd minute of the match between Belgium and Morocco, there was a consensus. “Morocco has a good defense, but they don’t have anyone to score the goals. We are missing a striker, a nine. They cross the center of the field, advance a bit and that’s it”, explains Adel in very good Spanish with a strong Arabic accent. At that minute, Roman Saiss scores and the nearly 200 men -yes, all men- in the room jump out of their chairs. They hug each other. They scream. The explosion of joy, in fact, detonated about 30 or 40 seconds before the goal was seen on the three giant screens in the room -basically a bar in which alcohol is not served or in the fridges- because Adel saw in a Spanish soccer application that Morocco had anticipated. When Courtois’s mistake was confirmed, they began to sing in Arabic “Let’s go, let’s go, Morocco”, as translated by Adel, a Moroccan, around 35 or 40 years old, a Spanish national and who has been working in the Belgian capital for two years. There is no longer a trace of the glasses of tea or mint that most customers had in their hands before starting the game.