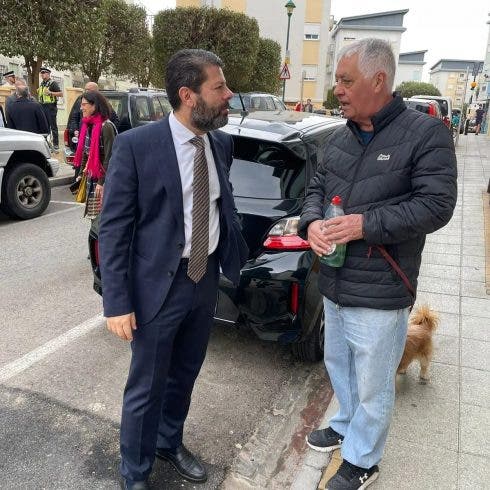 TWO of Gibraltar’s top politicians took a break from international politics and hot TV debates to prepare food at a local soup kitchen.

Founder of the GSLP party Sir Joe Bossano and Chief Minister Fabian Picardo showed they weren’t afraid of hard graft by preparing a tasty rice dish on Friday morning for the less fortunate.

Along with a priest and volunteers Karen, Stuart and Stephanie, they went at their cooking with the same gusto as they do their politics.

Octogenarian Bossano in particular was involved in the struggle for parity and only takes one day off a year, even working on Christmas Day.

The humbling process saw the pair then sit and talk to the soup kitchen users at St Theresa’s Church.

The Gibraltar government said it gave them a chance to ‘better understand issues facing those approximately 40 people who regularly use the free restaurant.

Later in the day, Picardo visited two of the government social housing estates to talk to the residents about subjects like cleanliness and anti-social behavior.

Picardo, accompanied by Housing Minister Steven Linares, chatted to residents as part of the on-location clinics the government holds.

The GSLP/Liberal government carried out large-scale maintenance works on both estates very early into their first-term.

It contrasted with former government the GSD that had let these estates fall into disrepair and criticized the new administration’s improvements as too costly.

Finally, Picardo was at Casemates to get his mustache and beard shaved off in support of Prostate Cancer awareness on Saturday.

The activities shed light on Gibraltar’s close-knit family dynamic where the electorate have a personal connection with their political leaders.