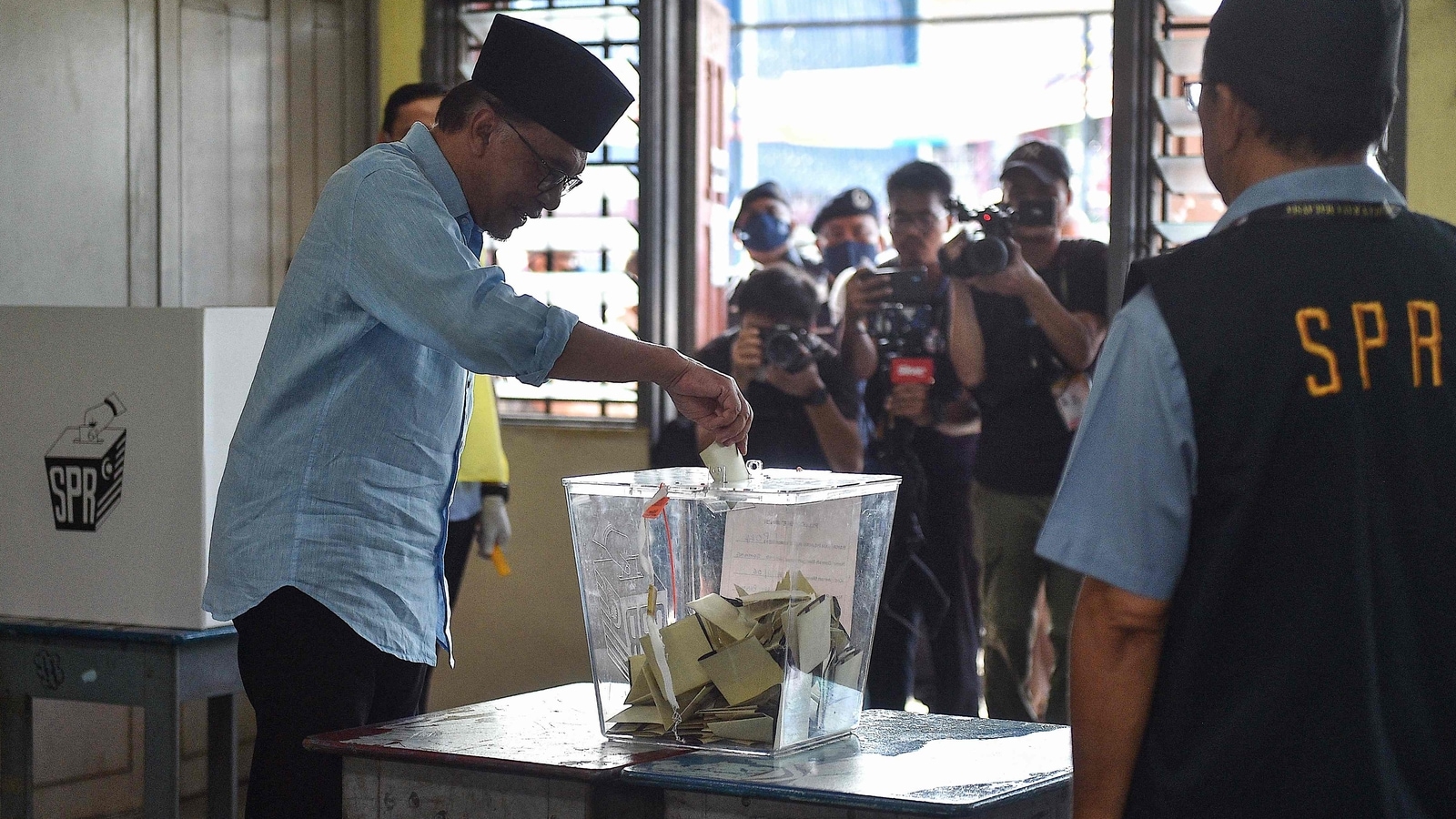 On November 19, Malaysia headed into its 15th general elections after what had been a tumultuous two years of political flip flops. From February 2020 till the snap elections were called a few months earlier, the country witnessed a change of three prime ministers (PMs) in a short span of 28 months. The move towards early elections was clearly in the offing following the political crisis that started with what has become popularly known as the Sheraton Move. This saw the unraveling of the Pakatan Harapan (PH) coalition which came into office in 2018, headed by Mahathir Mohamad to address the political excesses and corruption that followed the 1 MDB scandal under PM Najib Razak. The February 2020 crisis resulted when the expected handing over of power to Anwar Ibrahim did not occur, leading to a split in the coalition and the resignation of PM Mahathir. Following this a new coalition emerged under the leadership of Muhyiddin Yassin, the Perikatan Nasional (PN).

The PN was loosely put together with a combination of Malay Muslim parties – in its grouping were the United Malay National Organization (UMNO), the Pan Malaysian Islamic Party (PAS) and the breakaway factions of the Bersatu, which comprised several Malay Muslim voices. Two of the other alliance members of the PN were the Gabungan Parti Sarawak (GPS) and Gabungan Bersatu Sabah (GBS). The PN led by Muhyiddin Yassin stayed in office during the most crucial phase when Malaysia was caught in the grips of the Covid-19 pandemic. Muhyiddin stepped down in August 2021 and was followed by his deputy Ismail Sabri Yaakob who became PM and continued as the caretaker PM till the current electoral process.

Having won an unprecedented electoral mandate in 2018 as the leader of the PH, Party of Hope coalition in 2018, Mahathir Mohamad went on to become the PM for a second time after a gap of nearly 15 years. Two factors remained critical during this 2018 electoral outcome – first, the UMNO which had been in power within Malaysia since 1956 was for the first time defeated by a coalition which had former members of the UMNO itself. Both Mahathir Mohamad and Anwar Ibrahim, who headed the Parti Keadilan Rakyat (People’s Justice Party) were erstwhile members of the UMNO and Mahathir had served as PM heading the Barisan Nasional (BN) from 1981 to 2003.

Second, in many ways the 2018 election was a landmark in Malaysia’s ethnically and racially divided political space, where for the first time the UMNO and its coalition grouping, BN, were dealt a resounding defeat. This defeat was the result of the political fallout following the 1MDB scandal that rocked Malay politics, bringing a sharp focus on corruption and crony capitalism directly linked to the office of the former PM Najib Razak, who is currently in jail on corruption charges. Najib began to promote the 1 MDB as a state-owned investment fund to help in issues of development and promote growth within the country, but, in reality, it revealed a huge link between close allies of the PM and business cronies, who were tied to outside investors pushing the agenda on Najib’s electoral spending and in return receiving political support for illegal deals and kickbacks. Najib’s conviction in 2020 not only impacted his personal political future, but also had a profound impact on the future of the UMNO itself. The impact of the scandal has also hit the fortunes of the UMNO in which other top-level officials including, the current UMNO president and chair of the BN Ahmed Zahid Hamidi have been implicated in 47 cases of corruption, money laundering and breach of trust charges .

The total number of parliamentary seats is 222 of which any coalition was expected to garner a simple majority of a minimum of 112 seats. In the recently-concluded elections, only 221 seats were contested, while the vote in a constituency of Padang Serai was postponed due to the death of the PH candidate, M. Karupaiah just days prior to the ballot. While the total voter turnout for the election on November 19 is estimated to be around 73%, there is a significant demographic shift in this year’s general election, especially as the voting age has been reduced from 21 years to 18 years, which is a credible change as the percentage of youth voters entering the political participation process increases. This also impacted the results especially as the PH coalition has been at the forefront of calling for reforms in the electoral process and how democracy itself is shaped in the country. Much of the focus has also been on a more egalitarian approach to the racial politics in Malaysia. Moreover, the emphasis on clean governance and anti-corruption has been critical.

The immediate aftermath of the elections had given rise to a situation of electoral chaos in a country where the government formation has been dominated by coalition politics. The results ended in a hung parliament with none of the front running coalition groups receiving an unambiguous mandate to govern the country. The election results saw the PH securing 82 seats, while its closest rival the PN won 78 seats. The main Malay party the BN won just 30 seats placing it in a critical position where even though it had the lowest seat count in any general election held in the country, it was capable of playing the role of kingmaker by supporting either the PH or the PN. The week following the electoral results witnessed high political drama even as multiple options were considered including that of having a minority government led by the PH, while some constitutional experts weighed in on the possibility of an extended caretaker PM under the incumbent Ismail Sabri Yaakob. In a scenario of political chaos following the first ever hung parliament, the Sultan of Malaysia was in close consultation with the other Sultans and the leaders of the two leading coalitions to put aside differences and work towards a unity government that would put Malaysia’s recovery first, addressing the political crisis and the economic fallout of Covid-19.

The longest ruling coalition in Malaysia, the BN comprising three political parties – the UMNO, the Malay Chinese Association (MCA) and the Malay Indian Congress (MIC), became a central focus of consultations for a unity government. While it has held power over much of the post-independence period, it has also been at the center of Malaysia’s racial politics with undue support for the bumiputera policy and the special rights given to the Malay ethnic groups. The UMNO’s loss of electoral space was a slow and systematic one, based on a few critical issues. First, the clear-cut mandate of the party that supported racial politics, especially after the 1969 race riots and the manner in which it promoted the well-being of the Malay community at the cost of other racial groups within the country clearly articulated its racial bias . While in the late sixties this was seen as privileging the majority Malay-Muslim community, over time the policy became more entrenched leading to questions even within the UMNO cadre. In contrast Anwar Ibrahim’s Parti Keadilan Rakyat was focused on reform and a corruption free political process with recognition that Malaysia was for all Malaysians; a clarion call that was adopted by the PH.

The BN’s decision to support the PH ended the deadlock following the elections and Anwar Ibrahim was sworn in as the 10th PM of Malaysia. In his opening remarks, Anwar, the longest PM-in-waiting, stated that the mandate of the PH government would be clean governance, reform and corruption-free political environment. His overtures to the second leading coalition, the PN to be open to the idea of ​​a unity government may be the healing touch that Malaysia’s fractured politics currently needs. But the challenges faced by Anwar Ibrahim will continue. Implications of corruption among the UMNO cadre will need to be carefully addressed. Furthermore, given the coalition composition the choice of cabinet members and power sharing among the parties comprising the PH government will need deft handling. Regardless of the path ahead, there is poetic justice in Anwar Ibrahim’s electoral victory. As he was sworn into office, his ally-turned-foe and Malaysia’s longest serving PM Mahathir Mohamad lost his constituency after winning it for 53 years.