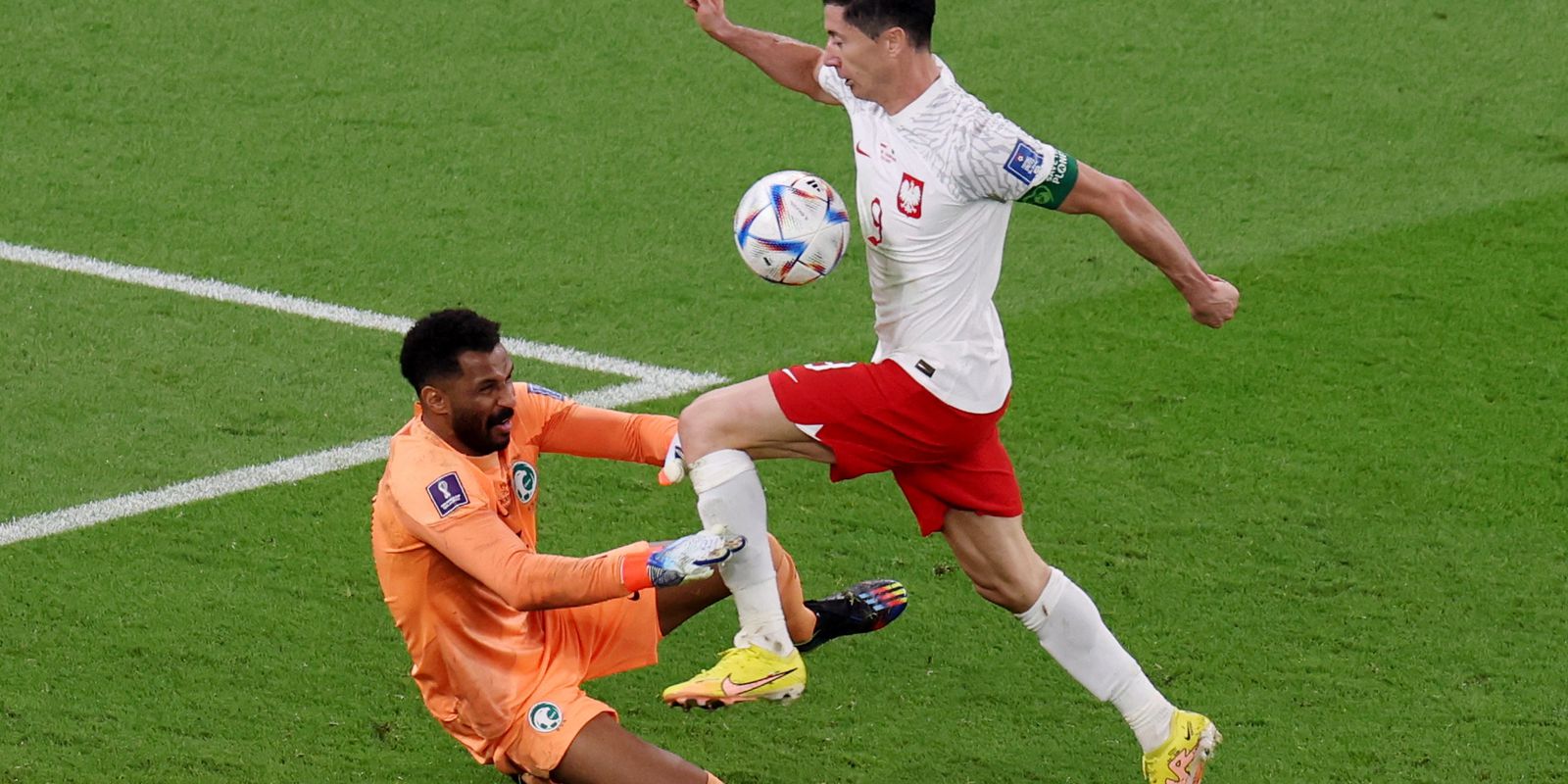 Twice winner of The Best, the International Football Federation (Fifa) award for the best player of the year in the world, in 2020 and 2021, Robert Lewandowski had not yet scored goals in World Cups. The wait came to an end this Saturday (26), in his fifth match at a World Cup. With a goal from the Barcelona (Spain) striker, Poland defeated Saudi Arabia, the surprise of the first round of the competition held in Qatar, by 2-0, at the Education City Stadium, in the capital Doha.

END OF THE GAME!

The Poles, who debuted with a goalless draw with Mexico (Lewandowski even had a penalty saved by goalkeeper Guilhermo Ochoa), were four points behind, provisionally leading Group C. The Saudis, who defeated the striker’s Argentina Lionel Messi by 2 to 1 in the first round, they remain with three points, in second. Argentines and Mexicans, by the way, play this Saturday, at 4 pm (Brasília time), at Estádio de Lusail.

The selections end their participation in the first phase next Wednesday (30), at 4 pm. Saudi Arabia takes on Mexico in Lusail and Poland takes on Argentina at Stadium 974 in Doha. The top two in the group advance to the round of 16.

The coach of the Saudi team, the French Hervé Renard, had to change the line-up that surprised Argentina. Without full-back Yasser Al-Shahrani, who took an accidental knee from goalkeeper Mohammed Al-Owais in the previous game and is out of the Cup, Saud Abdulhamid was the starter on the left side of defence. Captain Salman Al-Faraj, who arrived at the World Cup freshly recovered from injury and left the first game at half-time, gave way to fellow midfielder Sami Al-Naji.

In Poland, coach Czeslaw Michniewicz made three changes, dissatisfied with the team’s debut. Midfielder Krystian Bielik, midfielder Przemyslaw Frankwoski and striker Arkadiusz Milik won the places, respectively, of midfielders Nicola Zalewski, Sebastian Szymanski and Jakub Kaminski. The first two exchanges had already been made during the draw with Mexico.

The excitement for the victory over the Argentines was visible in the Asian team, who took the initiative and put pressure on Poland in the defensive field. In the 12th minute, defensive midfielder Mohamed Kanno broke through on the left and hit the edge of the area, forcing goalkeeper Wojciech Szczesny to stretch to save. Struggling to contain the rapid Saudi transition, the Europeans received three yellow cards from Brazilian referee Wilton Pereira Sampaio, even before 20 minutes.

Gradually, the Poles slowed down Saudi Arabia’s pace, reaching the Asians’ area and, finally, scoring the net. At 38 minutes, full-back Matty Cash launched Lewandowski in the area. The star anticipated Al-Owais and rolled for midfielder Piotr Zielinski to arrive beating and score the first goal for the European team in Qatar. In the next move, the Barcelona striker received the right and finished cross, low, but no one appeared in the area to finish.

The Saudis tried to regain their concentration quickly and would have managed to equalize before half-time had it not been for Szczesny. In the 42nd minute, Saleh Al-Shehri was brought down by Bielik in the area. With the help of the video referee (VAR), Wilton Pereira Sampaio gave the penalty. Fellow striker Feras Al-Brikan had the kick, low, saved by the goalkeeper, who saved the rebound, at the feet of midfielder Salem Al-Dawsari.

With you, LEWANDOWSKI’S FIRST GOAL in the World Cup! 🇧🇷

“Lewa” decides in a busy second half

The teams kept up the momentum going into the break. The Asian team in attack. At nine minutes, in the aftermath of a penalty kick, Al-Dawsari was ahead of the goalkeeper, who managed to block the shot in the small area. Five minutes later, Al-Brikan received the ball in the area on the left, after a good exchange of passes, but the finish was close to the Polish right post. In the next attack, Kanno took advantage of Al-Shehri’s tackle on defender Jakub Kiwior and dropped the bomb almost in the small area, but without direction.

Amid Saudi pressure, Poland scared with two balls on the crossbar. First, at 17 minutes, with Milik, with a header, after Frankowski’s cross from the left. Three minutes later, it was Lewandowski’s turn to be thwarted by the post. Arabia had a chance to punish the opportunities wasted by the rivals at 32 minutes, in a free kick by midfielder Nawaf Al-Abid, in the half moon, in the left of an individual play by the right, but the beat went to the left of the goal.

In the end, it was the European team that enforced the maxim of “who doesn’t do it, takes it”. At 36 minutes, defensive midfielder Abdulelah Al-Malki let the ball escape at the edge of the area, in front of Lewandowski. The striker did not waste and ended the goal drought in World Cups, deciding the first Polish victory in Qatar.