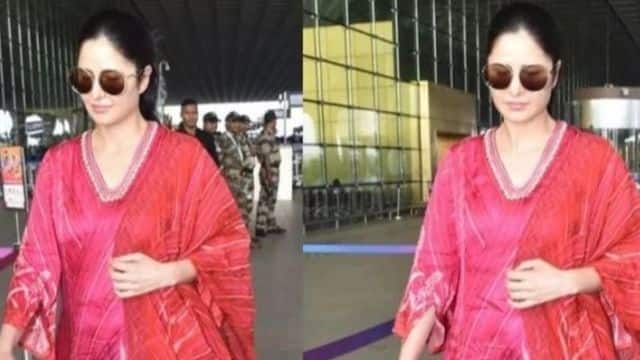 After marrying Bollywood actor Vicky Kaushal, Katrina Kaif has started appearing in a completely new look and mood. Recently she was spotted at the Mumbai airport in a completely traditional getup. Katrina Kaif was wearing a red suit and carrying a dupatta. Seeing the actress in this look, the fans were also very impressed and she has been praised a lot on social media.

Fans said – Vicky’s cultured bride
Talking about the reaction of the people on this video of her, a user wrote in the comment section, ‘How she always keeps herself in superstar aura.’ At the same time, a fan wrote, ‘You are looking amazing.’ One user told her Vicky’s cultured daughter-in-law, while one person wrote that Katrina is looking very classy in this outfit.

The news of Katrina’s pregnancy turned out to be false.
Please tell that Katrina Kaif and Vicky Kaushal had a love marriage. Both were in a relationship for a long time and then both tied the knot in a private event. The marriage of Katrina and Vicky Kaushal was counted among the biggest and talked about events of the year 2021. After marriage, there have been reports of Katrina being pregnant several times, which proved to be mere rumours.