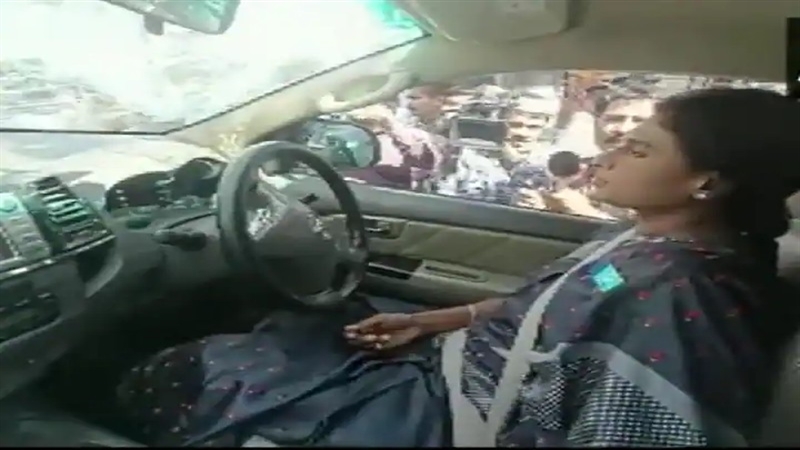 Hyderabad News: Hyderabad Police pulled the vehicle of Sharmila Reddy, sister of Andhra Pradesh Chief Minister Jagan Mohan Reddy, with a crane. All this happened while Sharmila was sitting in her car. Sharmila Reddy was sitting inside the car due to protests against Telangana Chief Minister KCR. This whole incident took place in Somajiguda, Hyderabad. Actually YSRTP party chief Sharmila had announced to lay siege to KCR’s house. Reddy, who was protesting, was already stopped by the police. CM Jagan Mohan’s sister was driving the car herself.

Police took to the police station

Sharmila Reddy locked herself inside the car after the Hyderabad Police stopped the car. The police also tried to open the gate, but failed to tow the car with a crane. According to news agency ANI, Sharmila Reddy was taken into custody from Somajiguda and brought to SR Nagar police station in Hyderabad. Let us tell you that Sharmila is the daughter of seven former CM of undivided Andhra Pradesh YS Rajasekhara Reddy, being Mohan’s sister.

#WATCH , Hyderabad: Police drags away the car of YSRTP Chief Sharmila Reddy with the help of a crane, even as she sits inside it for protesting against the Telangana CM KCR pic.twitter.com/ojWVPmUciW

Earlier on Monday, Sharmila Reddy was attacked by unknown people. They raised slogans of Sharmila go back and threw inflammable material. Due to which the bus caught fire. There were people inside the bus during the incident. Sharmila was staying at Narasampeta with the workers when the incident took place.

#WATCH , YSRTP Chief YS Sharmila, who was detained from Somajiguda after she tried to go to Pragathi Bhavan to gherao Telangana CM’s residence, brought to SR Nagar Police station in Hyderabad pic.twitter.com/8mIVuDGN96