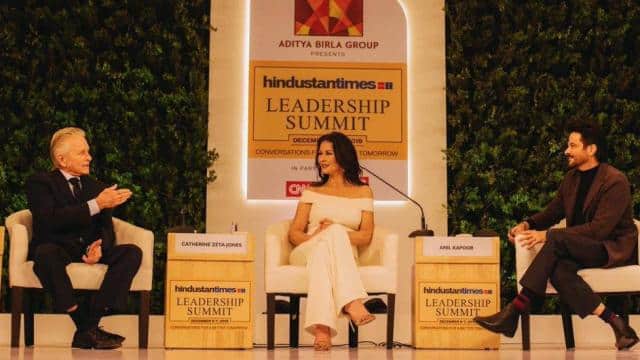 Children of stars have to work doubly because everyone’s eyes are on them. Hollywood actor Michael Douglas said this while remembering his days of struggle at the ‘Hindustan Times Summit’ on Saturday. He was talking to Bollywood actor Anil Kapoor. During this, Douglas’s wife and Hollywood actress Catherine Zeta Jones was also present on the stage.

Michael is the son of famous Hollywood actor Kirk Douglas. He said, ‘From the producers-directors to the audience, a lot of expectations were kept from me during my debut in films. I had to struggle a lot to live up to my father’s legacy. Michael, who won the Best Actor Oscar for Oliver Stone-directed ‘Wall Street’, said, ‘This award was very important to me. I began to believe that now I have come out of my father’s shadow. I have a different identity in Hollywood. He termed hard work, patience and ethics as the keys to success.

Successful marriage fund – ‘Happy wife, happy life’: Michael described ‘happy wife, happy life’ as the key to the success of his 20-year marriage to Catherine. Describing the story of winning Catherine’s heart, he said, ‘First you propose marriage to a woman 25 years younger than yourself. Then you find out that you both have the same birthday. And then you tell her in the very first meeting that you will be the father of her future children.

It is necessary to respect each other, laugh and smile: Catherine told that initially people used to say that Michael and her relationship would not last long, but she is happy that she married her best friend. Michael stood by her in every good and bad phase of her life. Catherine said, ‘We both respect each other and do not miss a single opportunity to laugh. This is the biggest secret of the success of our marriage.

Decided to stay away from the film industry during the days of stardom: Michael told that he never compromised with the upbringing of the children. During the days of stardom, he and Catherine used to arrange their dates in such a way that one of them stays at home. Not only this, both had decided not to take a house in Los Angeles, to stay away from the prying eyes of the film industry and paparazzi. They wanted to give their children a simple childhood away from the glare of glamour.

Never got a chance to come together on screen: According to Catherine, she and Michael were part of ‘Traffic’ which released in the year 2000, but the two did not get a chance to share the screen together in a single scene of the film. The two were supposed to work together in a big film based on India, but the project never took off. When asked if she would like to share the screen with Michael sometime in the future, Kathryn said, “Yeah, why not.” But both of us would not like to play the role of a married couple.

Catherine said, ‘A large section of fans believe that Michael should run for the presidency of America’.