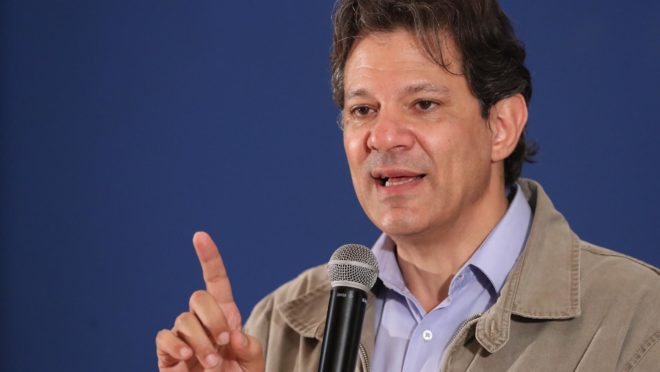 Quoted for finance minister, former mayor Fernando Haddad (PT) told an audience formed by the presidents of the big banks in Brazil that the tax reform it will be a priority in the government of Luiz Inácio Lula da Silva in 2023. Haddad participated this Friday (25) in a year-end lunch organized by the Brazilian Federation of Banks (Febraban), in São Paulo. He represented the president-elect, who is still recovering from throat surgery.

“One of President Lula’s biggest frustrations was having forwarded a tax reform proposal in 2007, with the support of the 27 governors at the time, but not being able to sensitize the National Congress to approve it. He wants to believe, and there are many reasons for this, that the current reform being discussed in the National Congress has more support and maturity so that it can be approved next year, ”he said in an interview with CNN. “That will be a priority,” he added.

Haddad was received by the president of Bradesco, Octávio de Lazari Junior, and by the president of Febraban, Isaac Sidney. According to Folha de S. Paulo, the former mayor of São Paulo sat at the same table with the presidents of Itaú, Milton Maluhy Filho; from Santander Brasil, Mário Leão; from BTG Pactual, André Esteves; and from Caixa Econômica, Daniella Marques.

In a speech, the president of Febraban demanded predictability from the future government and said that the banks are committed to the fiscal and social areas. “The rules of the game need to be established in a long-term perspective. Investment does not dialogue with institutional surprises, instability, clashes and political noise, lack of predictability and legal certainty.”

“Let Lula climb his team”, says Haddad about being minister

Asked by CNN if he had already been invited to be Minister of Finance, Haddad avoided the conversation, despite the strong rumors that surround the backstage of the transitional government, and made a humorous analogy with the Brazilian team that competes in the World Cup.

“You shouldn’t embarrass a president. We have to leave the president with the best possible freedom to compose his team, his lineup. there [o exemplo do] Tite: climbed, won the first game. Let Lula choose his team”, said the former mayor, who lost the race for governor of São Paulo in October.