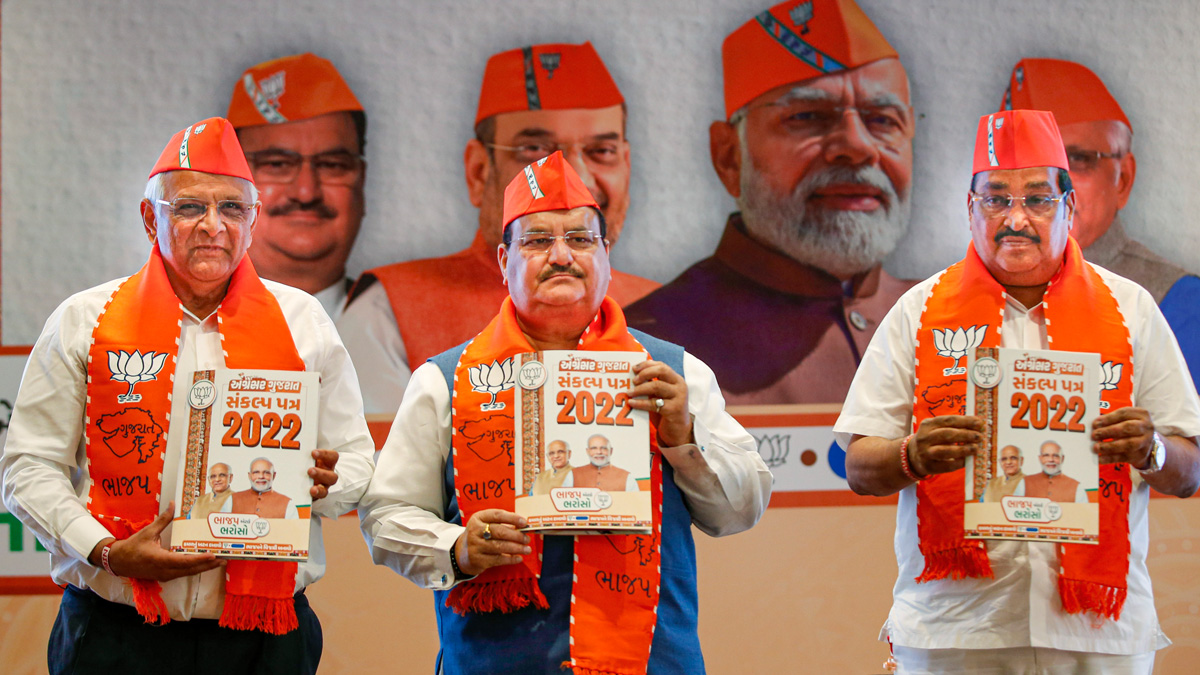 GandhinagarThe ruling Bharatiya Janata Party (BJP) on Saturday released its manifesto for the Gujarat Assembly elections. The manifesto promises to implement the Uniform Civil Code (UCC) and create an ‘anti-radicalization cell’ to identify and eliminate potential threats and ‘sleeper cells’ of anti-India forces and terrorist organizations did.

Other promises of the party include creating “20 lakh job opportunities” and taking the state’s economy to USD 1 trillion in the next five years. Party President J. P. Nadda met Gujarat Chief Minister Bhupendra Patel and state unit chief C.R. The manifesto was released at the state BJP headquarters in the presence of Patil. In the manifesto, the party also promised free education for girls from ‘KG to PG’ (Nursery to Post Graduation).

The party also assured that the amount of medical insurance cover under the Pradhan Mantri Jan Arogya Yojana (Ayushman Bharat) would be doubled from Rs 5 lakh to Rs 10 lakh per family. Nadda said, “We will ensure full implementation of UCC in Gujarat as per the recommendations of the state government committee. We will also create an anti-radicalization cell to identify and eliminate potential threats and sleeper cells from terrorist organizations and anti-India forces.”

The Gujarat government had announced on October 29 that it would form a committee for the implementation of the UCC. This decision was taken in the cabinet meeting that day. The manifesto also promised to enact the ‘Gujarat Public and Private Property Damage Recovery Act’ to recover the cost of damages caused to public and private properties by anti-social elements during riots and protests.

Other major promises include setting up of two seafood parks in South Gujarat and Saurashtra region, free diagnostic services and approved laboratories in health centers for weaker income group (EWS) families, three civil hospitals or ‘medi cities’, two AIIMS-level institutes and converting 20,000 government schools into ‘schools of excellence’. The BJP also promised to set up four Gujarat Institutes of Technology on the lines of the Indian Institutes of Technology (IITs).

Talking about farmers, Nadda said that if voted to power, the BJP would spend Rs 10,000 crore for the overall development of APMCs, mandis, sorting and grading units, cold chains, warehouses and processing centres, while Rs 25,000 crore Rs. will be spent to strengthen the irrigation system.

“We will build a ‘Devbhoomi Dwarka Corridor’ to establish it as the biggest spiritual center of western India,” the manifesto said. It will have the world’s tallest Sri Krishna statue, Bhagavad Gita Kshetra and a darshan gallery for the lost city of Dwarka. Assembly elections will be held in the state in two phases on December 1 and 5 and the counting of votes will take place on December 8. There is mainly a triangular contest in Gujarat between the BJP, the Congress and the Aam Aadmi Party (AAP). (agency)