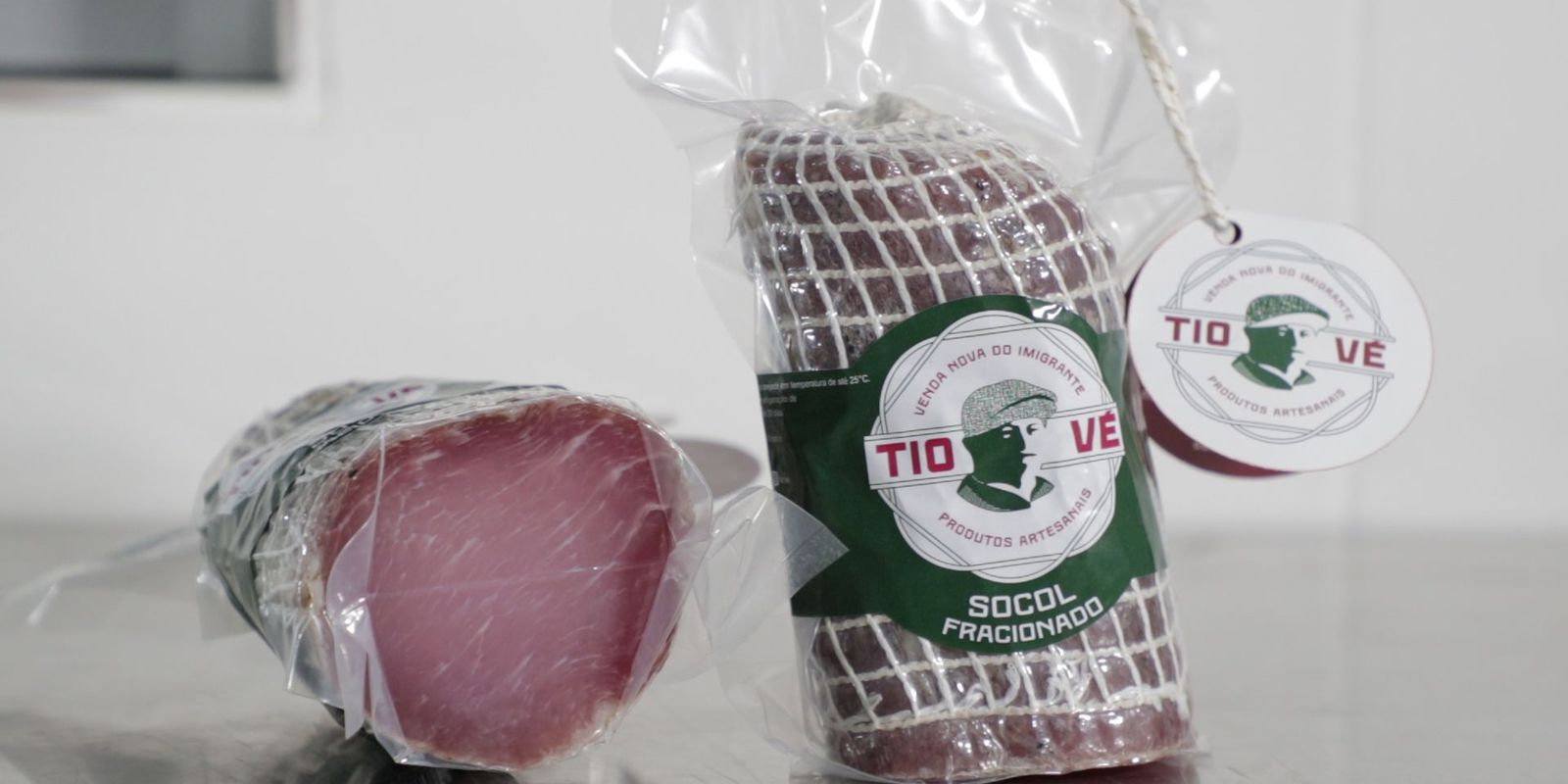 An Italian tradition that, upon coming to Brazil, adapted and became a unique product in the world. Socol is a sausage that can be used as a metaphor for the history of immigrants who arrived in Espírito Santo, settled in the mountains of Espírito Santo and molded themselves to Brazilian customs.

The product is derived from another widely consumed in Italy, the ossocollo. Both are made from pork meat: the one from there, from the animal’s neck, rich in fat; the one from here, from the loin, a much thinner and more acceptable part. since 2018 socol has had the geographical identity seal (GI), as an indication of origin, highlighting the tradition and quality of the product made in the northwest of the municipality of Venda Nova do Imigrante.

To make socol, the pork loin is left in brine for three days, then wrapped in a membrane called peritoneum and then hung up to mature for months – TV Brasil/Caminhos da Reportagem

A singularity of the product made in the region is a fungus found there, which in the case of socol is essential for maturing the meat. “The Venda Nova do Imigrante region was protected because this magic happens only here, this socialization process”, explains Alexandre Cesquim, president of the local Socol Producers Association.

Thais Falqueto’s family handcrafts the socol for the brand Tio Vé, a name that comes from her father’s nickname, Elvécio. The pork loin is left in brine for three days, then wrapped in a membrane called peritoneum and then hung up to mature for months. “This comes from my grandmother’s family tradition, on my father’s side, it was the way to preserve meat. We continue this tradition of more than 130 years”, says the producer.

Production is only done between May and October, the coldest months of the year. It is only during this period that the beneficial fungus develops for the sausage, which slows down the maturation of the meat, but does not cause any odor or taste, due to the membrane that protects it. “The green fungus, sometimes the white fungus, is beneficial for socol. The yellowish fungus alters the flavor, which happens in the summer”, says Thais.

The product of Italian tradition has adapted to the region and has become a unique product in the world. TV Brasil/Caminhos da Reportagem

Ten years ago, the family opened the business, which, in addition to the socol, includes a cafeteria and wine cellar. A type of attraction that is seen among other producers: in addition to producing socol, many also maintain a shop on the property, where visitors can meet who makes it and find out more about the family’s history and tradition. This made the region of Venda Nova do Imigrante become a gastronomic route for those who pass through the mountains of Espírito Santo, where there are also cafes and specialized restaurants.

One of the pioneers in agrotourism in the region is the Carnielli family, who saw the opportunity to expand sales from socol. Producer Lorenzo Carnielli recalls that when he was a child, tourists asked for more products: they wanted to bring coffee, cheese and cornmeal to make polenta. “Today, we have socol, sausage, cheese, dulce de leche, special coffees from the mountains of Espírito Santo and, little by little, the experience was complete”, he says.

Socol is produced in the coldest months of the year, between May and October – TV Brasil/Caminhos da Reportagem

Lorenzo belongs to the new generation of socol producers. Like many young people, he left the city to study, with other dreams. But he decided to go back and apply what he learned as a production engineer on the family property. He implanted a mini hydroelectric power plant, from the waterfalls that exist in the place. “We already generate 70% of the electricity we consume on the farm”, he says.

In the Angelim family, it was Karla who wanted to see the world outside of Venda Nova do Imigrante. She went to Vila Velha, studied economics at university, got married, but later missed her origins and her family. “I’ve always wanted to take forward our story, our ninth, my father, that gives me great joy”. This feeling is passed on to the family brand, which aims to slogan by Angelim Socol “a piece of our history”.

Karla’s husband, Alexandre Cesquim, is the president of the local association that brings together eight producers, of which six already have the right to use the IG seal for complying with quality standards. “IG goes hand in hand with culture, if you don’t have history, IG doesn’t recognize notoriety,” he explains. He claims that the seal brought fame to the product: “when people have this reference, they already say ‘I’m going to Venda Nova to visit the municipality’s agrotourism and I’m also going after the socol’, which added more value to it”.

Along with the gastronomic route, other activities have developed with the demand of tourism itself. Businessman Ricardo Girardi saw this happen: “in the last ten years, there has been this migration from family farming to tourism, even with the help of Sebrae, the Brazilian Support Service for Micro and Small Enterprises”. With this expansion, he saw the opportunity to create the Ecoparque Pedra Azul Aventura, which offers rides with ATVs, accommodation in chalets and camping🇧🇷

The location of the ecopark is strategic, on the Lagarto route, from where it is possible to contemplate three parks: Pedra Azul, Forno Grande and Pico da Bandeira. Ricardo also went to study abroad and came back, but he believes that now the scenario is different for the next generations. “With the restaurants, gourmet cafes, recognized all over Brazil, this process of the children leaving is over, because several activities are emerging in the region”, he concludes.

The program Reporting Paths airs this Sunday (27), at 22h, on TV Brazil🇧🇷