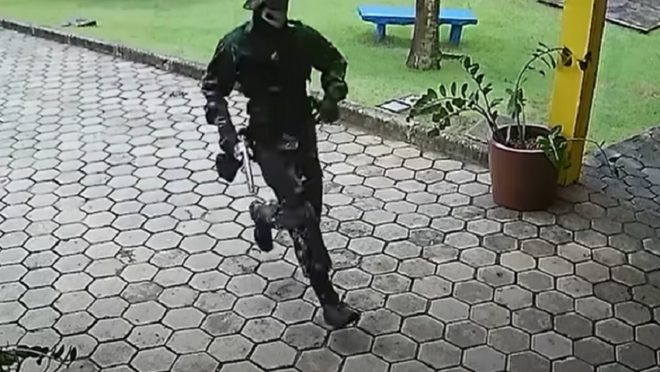 The suspect in the shooting attacks at two schools in Aracruz, Espírito Santo, is a 16-year-old teenager who was once a student at the Primo Bitti State School.🇧🇷 Photo: Playback/Youtube

The Secretary of Health of Espírito Santo confirmed this Saturday afternoon (26) the death of the fourth victim of the attacks on schools in the city of Aracruz, in the northern region of Espírito Santo. Flávia Amboss Merçon Leonardo, 38 years old, was a teacher at the Primo Bitti State School, and was hospitalized in a very serious condition in the ICU of the Jayme dos Santos Neves Hospital, in the city of Serra, where she was transferred after receiving first aid and undergoing surgery because of the severity of the shots.

In total, the attack, carried out by a minor under 16 years old on Friday (25), left four dead and 12 injured. According to information from the state government, the youth was arrested and used two weapons in the action, one being a .40 pistol, which belongs to the teenager’s father, who is a Military Police officer.

The other weapon is a private revolver, whose owner has not yet been identified. The shooter was arrested early Friday afternoon. He planned the attack for two years. The motive for the crime is still under investigation.