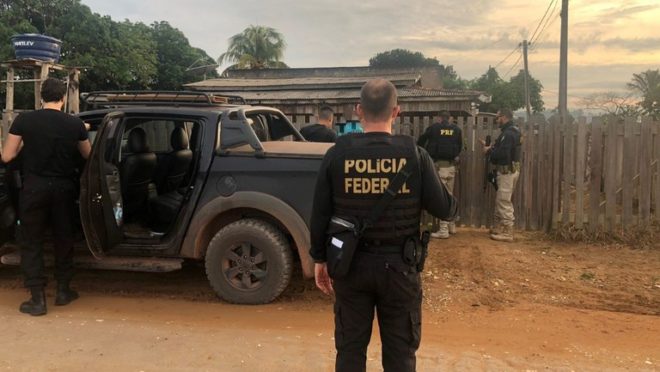 The PF in Pará carried out the operation this Wednesday (24).🇧🇷 Photo: Federal Police in Pará.

The Federal Police arrested this Thursday (24) six suspects involved in the attack on a Federal Highway Police (PRF) team during an attempt to unblock BR-163, in Novo Progresso, Pará. “Operation 163LIVRE” has the participation of the Federal Public Ministry (MPF) and support from the PRF.

According to the PF in Pará, measures were taken to investigate “the possible occurrence of crimes of attempted qualified homicide and resistance against federal highway police”. On the last 7th, PRF agents were attacked by stones and rockets. In addition, the corporation’s vehicles were “hit by firearms, which made it impossible to comply with the court order to clear the road”.

The PRF reported on the day of the action that an agent was injured, without seriousness, and a child felt sick with breathing problems due to the use of gas and had to be rescued by the police. The PF investigations began on November 7.

According to the Federal Police, the judicial measures determined against those investigated are based on the “probable existence of a criminal association”. Among the offenses investigated by the corporation are: “illegal embarrassment; qualified damage; attack against freedom of work; disobedience and contempt, in addition to those mentioned initially”.

The arrested suspects were arrested and sent to Santarém (PA). The PF reported that investigations are ongoing. The PF stated that the name of the operation “refers to the BR-163 Highway and the repressive action, aiming to add efforts to keep the highway free of blockages, threats or violence against the people who travel on it”.

Since October 30, demonstrators dissatisfied with the defeat of President Jair Bolsonaro (PL) in the elections have blocked the roads. On November 9, the PRF announced that the blockades and interdictions had been lifted.

Demonstrations on highways took place again on the 18th, with an escalation in acts of violence. According to the most recent balance, released by the PRF on Tuesday (22), the country’s federal highways are free of blockages.