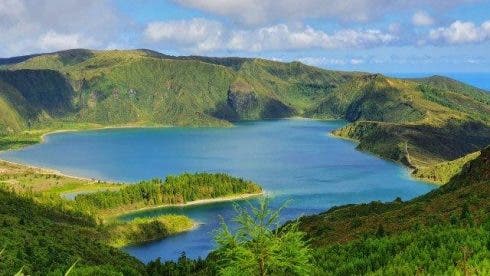 THIS summer with our kids now a respectable age of 14 and 9 years old we decided it was high time to expand all of our horizons so we ditched the traditional bucket and spade holiday for spurting geysers, wave-battered whales and temperamental paddle boards on the island of Sao Miguel in the Azores.

With direct flights of only three hours from Madrid the archipelago of the Azores is an attractive option. You can now impress your friends at the next pub quiz with your geographical knowledge that this volcanic string of islands lies 1500 km off the west coast of Portugal in the mid-Atlantic, well above Madeira which lies off the coast of Morocco

On our first day, relieved to be out of the intense heat on the Spanish peninsular, we enjoy the gentle sunshine as we step onto a large boat in search of whales. Moments later the clouds have rolled in and the boat is now keeling over. I hastily banish images of the Titanic out of my mind to concentrate on the Marine Biologist’s shrieks of excitement as a 10 meter sperm whale glides past.

By the time Moby Dick is in range for my camera the boat is dancing the Bossa Nova at full tilt with the horizontal rain driving everyone below deck where most people are heaving up lunch into small plastic sick bags. Weatherwise, the Azores and Scotland have a lot in common as you can often experience four seasons in the same hour.

The following day we opted for a Geotourism excursion and head off to the fascinating Gruta de Carvao whereupon we shredded our shoes as we clambered through jagged volcanic rock caves in hard hats with an over-zealous guide. The grotto had previously been used as a welcome cold storage in the days before fridges were commonplace. I’ve never seen the kids take so much interest in a geology lesson.

A tasty light lunch of chicharros (fried baby mackerel) ensued with mountains of boiled yam and yuca followed by Queijada (bean cake pudding). After which we waddled up to Caldeira Velha thermal springs and waterfall to let off steam and sweat out our calorific intake. The whole area is akin to a natural spa with hundreds of hot pools dotted among the lush, verdant vegetation.

Later on, in a desperate bid to inch my way up the scale in the Mummy cool-ometer I booked us onto a few adventurous sports excursions.

The first one had us all rappelling down ravines in chains and a giant yellow plastic diaper. The plastic nappy is supposed to protect your nether regions over your wetsuit as you bump down on your bottom over fast flowing waterfalls over rocks (keeping your arms glued into your sides). This proved a lot less terrifying than rappelling down ravines and jumping into narrow rock pools from vertiginous 5 meter heights but I did feel a tremendous sense of triumph over adversity when the terror trip (mercilessly) ended.

After that I felt ready for another bucket list activity to cross off….Stand Up Paddle Boarding. So we took a jeep to Sete Cidades where clusters of Swiss-style chalets cling to the shores of a volcanic lake and carefree cows wander aimlessly through pine forests. Goodness knows why it´s called Stand Up Paddle Board as our guide advised me to kneel down on it until I mastered my equilibrium. As it turned out there was quite a little current going on in the lake and the board had a mind of its own so there ensued a Mr Bean moment as I attempted to steer it away from reeds near the shore while in full genuflection.

The Azoreans are a resourceful bunch and we shall be extremely envious of their ability to make full use of the free natural resources with which to cook their food while we struggle with ever-rising energy bills this winter. It turns out that Sao Miguel’s natural geysers make for a handy free oven. Local chefs in Furnas think nothing of rising at 5.30 am to lower gargantuan pots of “cozido” on chains into gaping holes through the Earth’s core as geysers hiss noisy around them.

Seven hours later the pots are hauled up ceremoniously and a tasty lunch of slow-cooked meat, sausages and cabbage, kale stew is served in the nearby restaurants. As with so much Iberian fare, it is bigger on taste than it is on beauty. Especially when you spatter the soggy cabbage leaves with some local spicy pepper sauce.

Ponta Delgada, the island’s capital, is perfect for those wishing to experience the exotic atmosphere of Salvador, Brazil without the accompanying scary security undertones. One of our favorite dishes we stuck too (literally) was Feijoada de Marisco e Lapas or red bean stew with limpets.

Just remember to leave your Dolce and Gabbana bikini behind as the sulfurous hot springs will nuke the elastic of the top half and dye the bottom half oxidised orange.