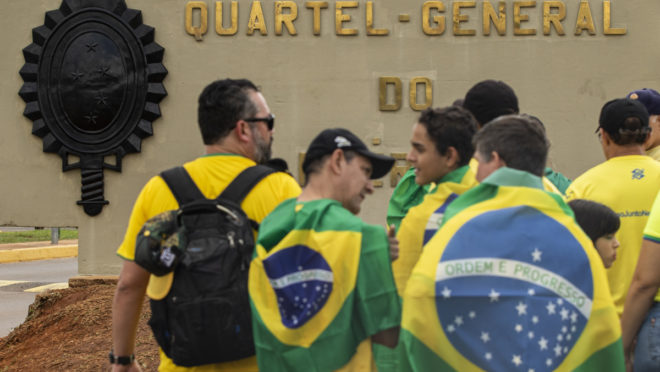 Federal deputy Vitor Hugo (PL-GO) presented this Friday (25) a bill to grant amnesty to demonstrators anywhere in the national territory and who have suffered some sanction due to protests on the highways and in front of the barracks against the outcome of the elections. Under the proposal, protesters, truck drivers, businessmen and all those who have participated in demonstrations on national highways, in front of military units or anywhere in the national territory from October 30, 2022 to the day of entry into force of the law are amnesty.

According to the parliamentarian, 257 signatures are needed for the bill to be forwarded directly to a vote in the plenary of the Chamber, without the need to go through the committees. By Friday night (25) 20 signatures had already been collected.

In the text of the proposal, the parliamentarian states that the amnesty includes political crimes or related and electoral crimes. “For the purposes of this article, crimes of any nature related to political crimes or committed for political reasons are considered to be related. Participation in demonstrations referred to in the caput also covers financing, organization and support of any nature, in addition to speeches, comments or publications on social networks or on any platform on the world wide web (internet)”, says the publication. . According to the proposal, the amnesty does not include the commission of crimes against life, against bodily integrity, kidnapping and false imprisonment.

The proposal also suggests that all fines imposed as a result of the acts be annulled. “The amnesty referred to in the caput also covers crimes allegedly committed when entering court and the consequent convictions for litigation in bad faith in electoral processes related to the 2022 presidential election. to natural and legal persons as a result of the acts”, says the project.

“The amnesty dealt with in this Law also affects the restrictions of rights of any nature or purposes imposed by the Electoral or Common Justice as a result of processes or inquiries in any way related to that described in Art. 1, in particular, those that turn against the free expression of thought, parliamentary material immunity regarding opinions, words and votes, freedom of expression and freedom of the press, whether in popular demonstrations, in interviews, in debates, in presentation of journalistic programs, on social networks and other vehicles published on the world wide web (internet) or in any other medium”, points out the text of the initiative.

In his justification, Deputy Vitor Hugo claims that the demonstrations that have taken place across the country after the elections are legitimate and spontaneously conducted by citizens outraged by the way the electoral process took place that year. “They are further enhanced by the reticence to receive and analyze, with a minimum of attention, respect and depth, the questions, doubts, suggestions, criticisms and evidence, all presented by various sectors of society, including the Armed Forces , scholars, technicians, political parties, citizens in general, commentators, parliamentarians, what is left of the free and independent press in Brazil, among others ignored, silenced or censored”, says the proposal.

We have no doubt that these are not anti-democratic actions or crimes of any kind. However, unfortunately, this conviction is not reverberated by important sectors of society, which can impose accusations of committing crimes of the most diverse natures on the families currently camped in different parts of the country, which would constitute the greatest of contradictions experienced by our country in recent years. recent times: precisely those who peacefully fight for Brazilian democracy are accused of attacking it.

Still in the justification of the proposal, the parliamentarian affirms that it is not correct to punish citizens who are in full exercise of their constitutional rights of free manifestation and that autocratic decisions are pushing the country to moments of tension. “The search for a peaceful solution to the controversies arising from this (electoral) process impels us to present this bill that aims to build bridges so that we can face the challenges of the phase that will come with serenity and fearlessness. It is not right to punish or intimidate citizens in the full exercise of their constitutional rights to free peaceful demonstration. Potentiating the chaos that can follow increasingly autocratic and disrespectful decisions regarding the basic principles of our Constitution is to push the Nation into even greater moments of tension, with unimaginable consequences for our future”, says the deputy in the proposal.

“The approval of this bill constitutes, in this context, a gesture of pacification and redemption by Parliament in the face of the millions of people who have been on the streets at this very moment, for weeks now, under sun and rain, in heat and cold, expecting from us, their worthy representatives, some attitude. May the approval of this proposal be, therefore, a first step for the National Congress to resume its role as defender and protector of the Brazilian People, through the constitutional system of checks and balances, so invoked today by many, but at the same time so dimmed by the inaction of a few. In view of the above, I ask for the support of the Noble Peers for this bill to be approved, in the certainty that we will be on the side of millions of Brazilians who, at this moment, need our courageous and fearless action”, states the justification for the bill. .