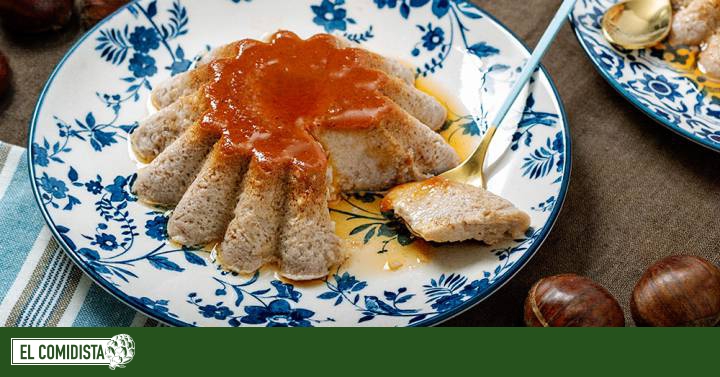 A good homemade egg flan is in itself a delicious dessert, but if we want to curl the curl we can tune it up by adding other seasonal ingredients such as chestnuts, of which I declare myself a superfan. I am such a fan that during their short season I usually eat them for breakfast alone, lightly cooked in the microwave, giving them a previous cut in the shell so that they do not explode.

Chestnuts cooked and mixed with other ingredients always provide an extraordinarily subtle flavor, as in this chestnut flan, no more and no less (which also gives it a slightly firmer consistency than a conventional flan). Here the chestnuts are in the form of an unsweetened cream or puree, which can be found relatively easily in stores in the fall or before Christmas. If you are very diligent, you can prepare the same amount of cream that is used in the recipe, cooking the peeled chestnuts from their hard shell in milk, removing the inner skin when they are soft and mashing them with a little of the same cooking milk.

As for the cuajado of the flans, you know that the traditional method is the bain-marie in the oven (which perhaps is not very efficient energetically speaking, much less with the times). As the most efficient method, a steamer is great for this task, although it must be large enough to fit all the flaneras. In my humble opinion, one of the best methods is a bain-marie in a casserole on the fire, keeping the water at a low boil and taking care to place a grid or folded cloth between the bottom of the casserole and the flaneras, so that they receive the heat of the water through its bottom and not directly from the fire.

Some people are very much in favor of using the pressure cooker, but the black boxes in which you don’t know what is happening make me very nervous. Of course, whatever method you use, it is always convenient to cover the flaneras so that the upper part of the sweet does not dry out and, incidentally, too much water does not enter due to condensation.

That of not burning the caramel, curdling the flans well without making them look like reinforced concrete and unmolding them without disrupting them. You can.

For the chestnut flan

If you make this recipe, share the result on your social networks with the hashtag #RecipesComidista. And if it goes wrong, complain to the Defender of the Cook by sending an email to defensoracomidista@gmail.com.