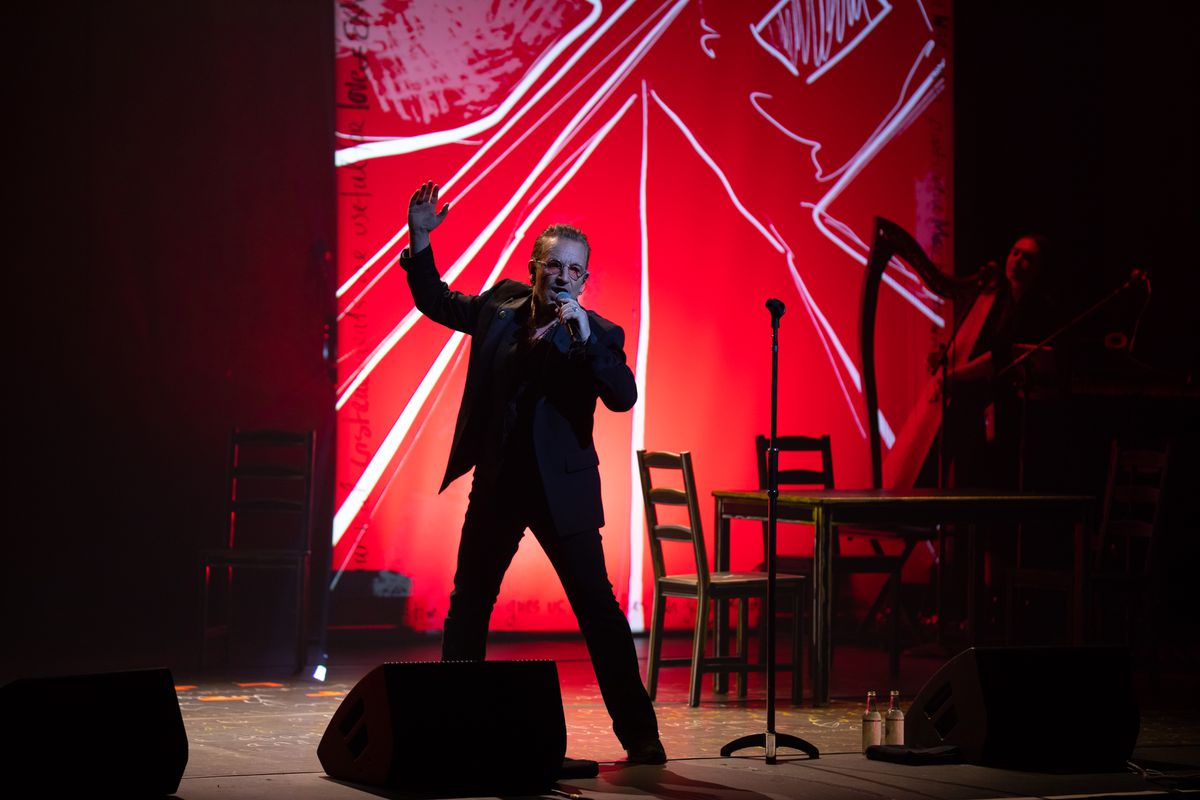 He goes on stage. Look to the side. The Edge is not there. To his left no sign of the elegant figure of Adam Clayton. Nor do Larry Mullen Jr.’s drumsticks impact the drums from the background. The audience roars and applauds. But they don’t add up to 40,000, as is usual at a U2 concert. Only 1,300. We can also talk about the scenery: neither catwalks nor giant golden eggs nor bulky circular screens. Indeed, we are in the most atypical concert of Bono’s career, that messianic dominator of the masses who last night became a close human being, flesh and blood, our colleague, the one who has lived longer than us and who knows how to tell it. and how to sing it It was as if the man who has dominated arena rock for the last 40 years took us to the back porch of the pub, put his arm around our shoulders and said: “Let me tell you…”.

It happened last night at the Coliseum theater in Madrid, in the heart of the capital. An intimate show, against the current, delicious, unique. Bono (born 62 years ago in Dublin as Paul David Hewson), who always wanted to be David Bowie, looked much more like Bruce Springsteen last night and gave a performance along the lines of the one offered by the author of Born to Run on New York Broadway. The basis is the same: the edition of a book of memories. From there it consists of telling stories from that text, interpreting songs, revealing youthful sins, confessing fears, dwelling on intimacies and dramatizing relevant episodes of his life. Bono’s book has just been published and is titled Surrender. 40 songs, one story (Ed. Penguin). A 670-page volume (beats Springsteen’s memoirs, with 561), a biography of a rocker different from what the genre has accustomed us to: it puts villainism in a corner (perhaps there isn’t much to scratch in that sense) and transcends from reflection and philosophy. Because few musicians have taken a nap in the White House. Bonus yes.

All spectators had to put their cell phones in small bags that were closed and could only be opened at the end of the concert with a device similar to the one that removes alarms from clothing in stores. That situation alone (what if something happens to the children while I’m without a cell phone?) led to a special evening. The entry of press photographers was not considered possible either. The images that illustrate this chronicle have been provided by the artist’s team and belong to other shows on the tour. Bono dressed in black clothing and wore his now familiar round orange mirrored glasses. A couple of tables and some chairs was all the singer needed last night. The sparse furniture served as a narrative element: the different characters of the story sat there, invisible beings brought to life by the singer with his imagination. Three musicians accompanied him during the two-hour show: a harpist (Gemma Doherty), a cellist (Kate Ellis) and a percussionist and keyboardist (Jacknife Lee). They supported the protagonist with their voices when the song required it. In the background, some screens illustrated the stories and songs with drawings by the singer himself.

Perhaps it is not possible to speak of a concert because the time was divided equally between music and monologues. “I feel a little naughty tonight, but I have permission from The Edge, Larry and Adam to do this,” he said in Spanish as soon as he started. It was an exception because he almost always spoke in English and there were no subtitles. The function was flexible, with moments for laughter, clapping or tears. After so many years performing before crowds, Bono did not dispense with directing the microphone to the audience on occasion. The songs played in a slowed down frequency. A good part of the concert was bathed in a mystical air, almost from a church. Perhaps the word is spiritual. And, coming from a man with as much faith as Bono, it’s quite possible that he enjoyed the songs more than in a rock setting. Because U2 songs never sounded the same as last night. This twilight tone created a magical atmosphere at various times. The pain was touchable as he described the death of his mother (Iris) from an aneurysm when he was 14 years old. “So what was once a home became a house. Tree men [él, su hermano y su padre] full of anger and melancholy,” he described.

The complex relationship with his father took up a good part of the night. The singer emotionally undressed telling how he longed to find his father’s approval, but not even when he was a world-acclaimed rock star did he get it. He staged the relationship with conversations in which he played himself and his father. He wasted acting skills by moving dramatically and playing with the tones of the voices. And there was chemistry with the public from the first moment, surely the most participative audience of a tour that has gone through Canada, the United States and some parts of Europe such as the United Kingdom, France or Germany. The audience cheered him on, he clapped his hands in the songs and chanted choruses. Some also complained that the sound from the microphone was not heard well in the part where they were. The protest dissipated after the first 15 minutes.

The protagonist also talked about his partner, of course, Ali Hewson, who would surely be behind the scenes and to whom he dedicates so many pages in Surrender. They met when they were studying at the university and have never been apart. Add 40 marriage. “She saved my life,” she said on several occasions. In one of her crisis as a couple she composed With or without you that he performed last night and all that was missing was, in an intense ending, tearing off the buttons of his shirt and showing his bare chest. What the Irishman offered was so intimate and earthy that what he has shown us in the last four decades in stadiums with U2 seems like a parody of rock stars, a kind of Spinal Tap deluxe. interpreted Where The Streets Have No Name, Beautiful Day, Vertigo, Desire… And for the first time we get a taste of the vocal antics you can handle without the gimmicks of crowd concert technology.

In the chapter on humor, it is worth mentioning when he imitated Pavarotti, Princess Diana of Wales (her father’s encounter with her was hilarious) or her mythical manager, Paul McGuinness. And even when he played his surgeon, who operated on his heart in 2014 when Bono, according to what he confessed, was “about to die.” Sunday Bloody Sunday it was heard eerie, with the strings of the harp performing the function of The Edge’s guitar. Y Pride (In the Name of Love) it emerged with the Live Aid concert logo in the background. He mentioned, of course, his activism and how much has been achieved to fight AIDS or poverty in Africa (by the way, he thanked Penélope Cruz for her humanitarian work), but he was restrained in this regard. It was about telling the story of him and his band and this show manages to convey, even more than a group concert, how important U2 has been to pop music.

The evening ended with a performance a cappella of Return to Surriento, a Neapolitan piece that his father adored in the voices of his favorite tenors. Right after, Bono left amidst ovations leaving the heart that he had opened to 1,300 privileged people on fire. It is very possible that even his father, wherever he is, will be proud of him this time.

All the culture that goes with you awaits you here.