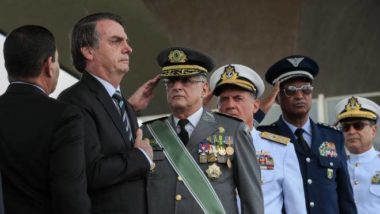 Jair Bolsonaro during the Army Day Commemorative Ceremony, with the Imposition of the Order of Military Merit and the Brazilian Army Medal.🇧🇷 Photo: Marcos Corrêa/PR

The meeting with the commanders of the Armed Forces took place at Palácio da Alvorada to discuss the promotion of general officers, according to government interlocutors. People’s Gazette🇧🇷 Reserve general and vice-presidential candidate in this year’s elections, Braga Netto, was also present.

The meeting takes place a day after Minister Alexandre de Moraes, president of the Superior Electoral Court (TSE), rejected a lawsuit filed by Bolsonaro’s electoral coalition to invalidate the votes of 59.2% of the electronic ballot boxes used in the second round. Interlocutors claim, however, that the topic was not the central agenda of this Thursday’s meeting.

The meeting between Bolsonaro and the commanders of the Armed Forces was not foreseen in the official agenda informed by the website of the Presidency of the Republic. The only public meeting was scheduled for 11:00 am, with the Deputy Chief for Legal Affairs of the General Secretariat, Renato de Lima França.