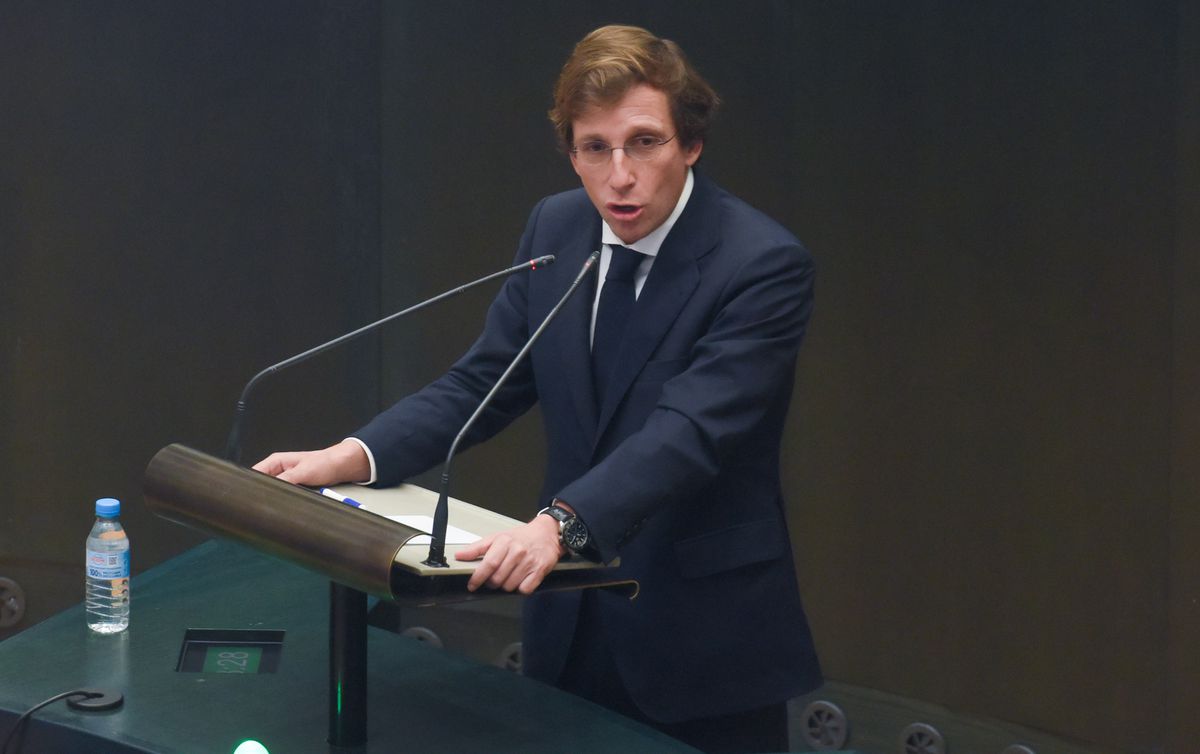 Today Roberto Sotomayor, the Podemos candidate for mayor of the capital for 2023, has come to have fun at the plenary session of the Madrid City Council. The electoral horizon is getting closer and closer. From the first hour, the 57 councilors have been very aware of the mobile phone. Political parties are finalizing their electoral lists. calls. WhatsApp crosses. Leaks to the press: elections in sight. Some of those who are now sitting here have learned these days that in May 2023 they will not have the flirtatious white chair with wheels from the Cibeles palace plenary sessions. Others dream of having one, like the headliner of Podemos, who stepped on the chamber this Tuesday morning by surprise. The presence is not trivial. The goal is to get out in the media anyway. The battle for the vote of the left in the capital will be fierce. At the moment, there are already four games: Más Madrid, PSOE, Podemos and Recupera Madrid. This penultimate plenary session of the year has served for the opposition to dismantle the management of José Luis Martínez-Almeida during this term. The mayor of the capital had not looked so overwhelmed and cringing in the face of opposition attacks in a long time.

The plenary session began at 10:17 a.m. and had its climax with the defense of the presenter of the program the anthill by the mayor, after one in the afternoon: “Between Pablo Motos and Pablo Iglesias I have no doubts.” It is understood that he is with Motos.

First thing in the morning, José Manuel Calvo, who was Councilor for Town Planning with Manuela Carmena, got up from his seat in the Mixed Group smiling. Upon reaching the lectern, he looked at Almeida out of the corner of his eye:

He reminds me of the mayor from the movie Shark, where a large shark appears and the mayor avoids acknowledging this problem.

Almeida looked on from the first row in astonishment, while the rest of the PP bench looked up from their mobile phones. “You make statements against everyone,” Calvo continued. “He is at everything, except to solve the problems of Madrid.” Calvo has highlighted the “fiasco” of the Metropolitan Forest, where the trees that were recently planted have dried up. He has criticized the recently inaugurated La Cebada sports center in the La Latina neighborhood which, as he told eldiario.es in early november, It has a closed soccer field: the baskets do not fit, nor the goals. No one can play. The City Council designed this infrastructure without the minimum height of seven meters so that the people of Madrid can have their parties. Calvo has also criticized the crowds, the pollution, the traffic jams on the Gran Vía due to the switching on of the Christmas lights… “What is the mayor doing who does not defend public services? What is he going to do so that this does not happen again? ? Is he going to resign himself?

Later, it was the turn of the PSOE, a municipal group downcast after the appointment of Minister Reyes Maroto as a candidate for mayor just a few weeks ago. Most of the eight councilors do not understand the communicative management of the appointment, overshadowed by the continuous leaks of candidates: that if a minister, a minister, a writer. The current spokesperson, Mar Espinar, found out about Maroto’s appointment shortly before her candidacy was made official. Her future is still uncertain. The mayor Pedro Barrero, however, has thrown himself squarely against Almeida. In times of internal wars, he unites nothing more than enemies:

—You can’t do worse than this Town Hall.

Upon hearing such a statement, the PP councilors have waved their hands and even, in unison, like an improvised chorus in a theater, have released: “Alaaa!”. “You – Barbero continued, pointing to Almeida – have been missing during these three years, more concerned with making your way within the PP. First with Pablo Casado and, now, with Isabel Díaz Ayuso. What Madrid needs is a mayoress who loves her…”. Suddenly, the president of the plenary session, Borja Fanjul, of the PP, has cut off the socialist’s microphone: “Thank you very much, his time has ended.”

It is understood that Barbero was referring to the socialist Reyes Maroto as mayor and not to Rita Maestre, the other woman who will be a candidate for mayor of the capital. Maestre, from Más Madrid, has defended the workers of the municipal hotline 010, which she has collapsed for several weeks, during her first intervention. “What we have seen these days we have never seen,” Maestre criticized. “They have loaded this service.” He has also questioned the management of municipal schools, where PP and Ciudadanos have “only” projected two centers in four years. “His ideological fury has resulted in zero new sports equipment.”

In her second intervention, she has once again announced that if she is mayor, she will demolish the scalextric in Puente de Vallecas as a first step. And she has launched a harsh rebuke, with data, of the health centers in the capital that do not have doctors: “You have spoken here more about ETA than about Health. The Barajas district does not have a doctor, the Espronceda district does not have a doctor, and Orcasitas does not have a doctor. What are you going to do as mayor of Madrid to protect the health and sanitation of the people of Madrid? The Más Madrid bench immediately applauded, some have even stood up.

Almeida got up from his seat and went to the lectern to respond ironically: “Next time they rehearse better the performance”. However, the health crisis that is plaguing the capital and the region, with health centers open without doctors, has taken its toll on the mayor, who has found himself in the position of having to tiptoe over this matter. “Do you know how much the Samur budget in the city has increased? 30 million more. We are at the maximum. And in Madrid Health? 20 million. Three of the best public hospitals are in Madrid. We will meet to improve public health. I will not be in the demonstrations that insult Ayuso as a murderer.