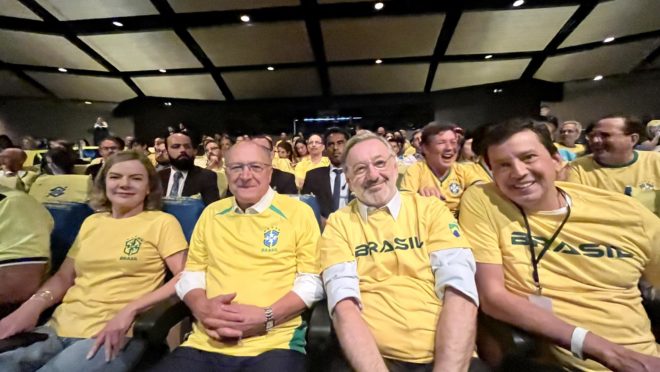 Alckmin and members of the transition team at the CCBB watching Brazil’s opening match in the World Cup.🇧🇷 Photo: Reproduction/Twitter Geraldo Alckmin.

The vice-president-elect, Geraldo Alckmin (PSB), and part of the government transition team attended this Thursday (24) at the Banco do Brasil Cultural Center (CCBB) the debut of the Brazilian national team in the World Cup. The CCBB is the seat of the transitional government.

Brazil beat Serbia 2-0 at the Lusail stadium, in Doha, Qatar. Alckmin risked the score of 2 to 1 for Brazil. He and the other team members wore the classic yellow shirt. Some were customized with references to Lula and the PT.

The event filled the CCBB theater, in Brasília, where a big screen broadcasts the game. Professionals from the press were invited to attend, with the right to distribute popcorn and soft drinks.

President-elect Luiz Inácio Lula da Silva (PT) accompanied the match in São Paulo. He underwent laryngeal surgery earlier this week and still hasn’t gone to Brasilia. In the social networksLula posted a photo wearing the yellow shirt of the national team next to the future first lady, Rosângela Silva, Janja, and congratulated the players: “Congratulations Brazil. Towards the sixth!”.

Before the game, the president-elect invited Brazilians to wear the green and yellow shirt with pride. “Today the dispute for the six starts. We are going to wear our green and yellow shirt, wear it with great pride and follow the national team. Our shirt has the colors of our flag, which represents 215 million Brazilian men and women. Let’s cheer together for Brazil “, said Lula on Instagram.