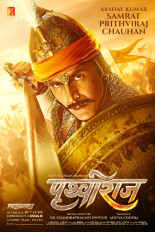 The film was earlier scheduled to hit the screens on January 21, but was postponed due to the Omicron outbreak in the country.

A tweet from production banner Yash Raj Films said, Itihaas is coming to the big screens on 10th June! Releasing in Hindi, Tamil and Telugu. Watch Samrat Prithviraj Chauhan with YRF50 only in theaters near you.

It will release in Hindi, Tamil and Telugu. The film is directed by Chandraprakash Dwivedi.