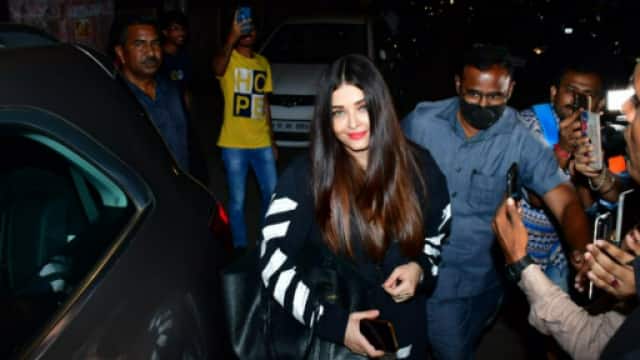 Today is the birthday of Riteish Deshmukh and Genelia D’Souza’s son Riaan. Both the stars threw a grand birthday party for their son. Many celebs reached this party with their children and everyone was spotted going to the party. Aishwarya Rai Bachchan also arrived with her daughter Aaradhya. During this, the video of both has surfaced. In the video, you will see that Aishwarya gets out of the car with Aaradhya. Both then go towards the venue. During this, Aishwarya takes gifts from the bodyguard’s hand and then starts walking straight. During this, the fans got a bit confused after seeing Aishwarya’s expression. Users are commenting on the video that what snatched such gifts, they can also take them away. So there someone commented that there is such a heavy gift that both mother and daughter are carrying it.

Other star kids attended the party like Taimur Ali Khan with brother Jeh, Soha Ali Khan’s daughter Inaaya, Shahid’s two kids Misha and Zain, Ayushmann’s kids Virajveer and Varushka. Ekta Kapoor’s sons also attended the party. Apart from this, another video has surfaced when Aishwarya comes back from the party with Aaradhya, then Genelia comes to drop her outside till the car.

Talking about Aishwarya Rai’s professional life, she was recently seen in her film Ponniyin Selvan 1. It was a Tamil film which was released in many languages. Aishwarya’s work in the film was well received. The film did well at the box office as well. Let us tell you that earlier she was seen in the film Fanney Khan released in the year 2018. Rajkumar Rao was in the lead role with Aishwarya in the film. Although the film was a flop. Now Aishwarya is going to be seen in the direct film Ponniyin Selvan 2. According to the reports, this film will be released next year.

Bid on the gap of films

In an interview, Aishwarya was asked why she is working in films after a long gap. So on this the actress had said that she never thinks that she has to do a film in such a short time. Have to come on screen in this time. I just want to do the best work that the audience likes. This is important to me.