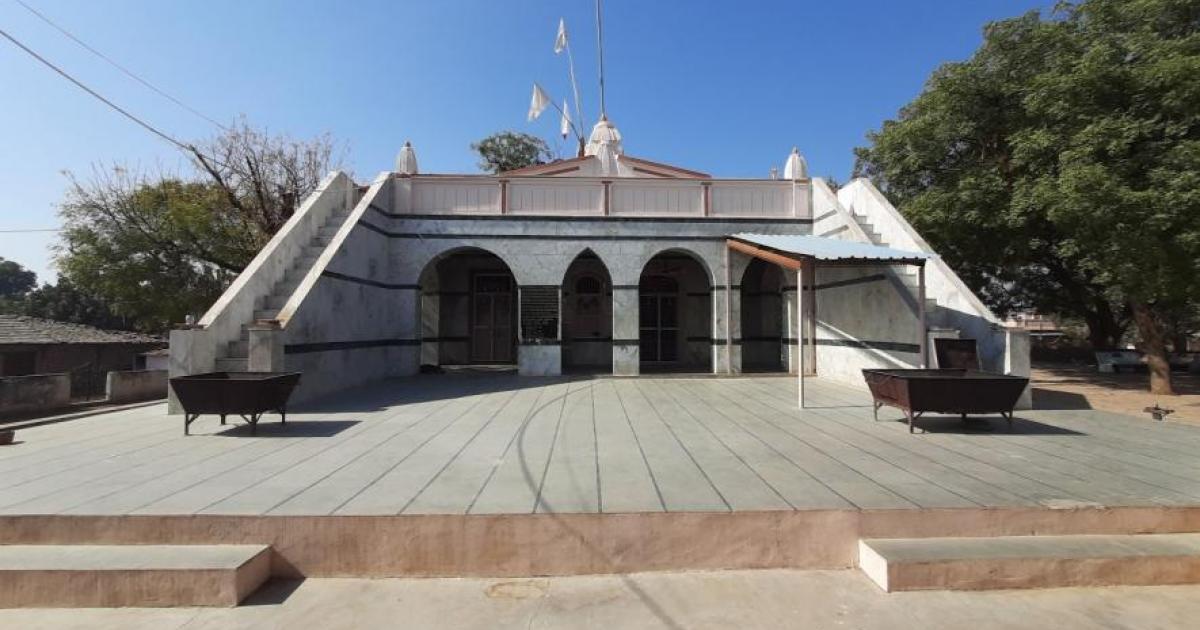 Dhanera, Gujarat: A temple with two entrances opens up to a wide hall leading to two fire pits in front of the two doors from where people enter the different temples separately. One temple remains open while the other remains closed – the local Scheduled Caste (SC) Gohil community claims the closed temple as their own.

As this journalist walks towards the closed part of the temple, the priest enters from the other side. “This is an age-old practice. The temple is 100 years old; When asked about caste discrimination, the priest says, “Some things cannot be changed.”

The 68-year-old priest continues to support the discriminatory practice. “We don’t do any injustice, but temples should be different,” he says, adding that “they have been taught, it is part of the culture” that the kind of difference that was there continues.

This temple is located in Sankad village of Dhanera taluka of Banaskantha district of Gujarat. Newly married couples come to the temple to seek blessings. People from 30 villages come to this temple.

“Is God different? Are our offerings different? Is the reason for meeting (marriage) different? Then why can’t we share the same place?” Dinesh, 35, a resident of Sankad, asks the question.

Similar stories of discrimination are told in the temples of Saral, Thavar and other villages in Banaskantha.
A teenager from the SC community peeping into the temple in Sankad

When women from the Gohil and Solanki communities went to Saral to attend a Navratri celebration, they were asked to leave. “We were not allowed to dance, sing or participate in worship and were asked to leave,” says Meeta, a firm believer in BR Ambedkar’s principles.

Simple village women follow only the principles of BR Ambedkar.

In the Shiva temple in the same village, women from both these communities are barred from fasting for 16 Mondays in the holy month of Shravan. “We are told to stay away and maintain distance,” says Mita.

Even dead bodies of members of scheduled caste communities are discriminated against because of their castes. All the 94 villages of Dhanera assembly have separate cremation grounds for different castes.

The discrimination does not end here. There are pending court cases regarding the ownership of the cremation land in Vasan and Malotra villages. Vasan’s SC community alleges that the land allotted to them by the collector for 40 years has been encroached upon by the sarpanch and other upper castes. One such incident reportedly happened in Malotra, where the land is demarcated by a fence.

exclusion from public places to settlements

An unpaved road with an open crematorium leads to a settlement in the forest at Sankad. The township, which bears all the marks of exclusion due to its remote location, consists of mud houses with a thatched wall. They belong to the Valmikis, the last in the caste system, who are also oppressed by the scheduled castes of the village.

The caste discrimination in these villages does not start with the Brahmins. The Other Backward Classes oppress the Scheduled Castes (Gohils and Solankis), who in turn discriminate against the Valmikis.

Geeta is the youngest and most educated of the three sisters-in-law in the family, making rotis of millet for lunch at a house. She had studied till 8th standard. “We are not allowed to raise our voices. If we do, we are abused,” says 19-year-old Geeta, who could only study till Class VIII.

In 2017 and earlier, the assembly election manifestos of the ruling Bharatiya Janata Party (BJP) consistently promised to end caste discrimination in Gujarat. However, these villages tell a different story.

“During the last campaign, the candidates promised to build pucca roads and pucca houses. But you can see the condition of the road you use to reach our house,” Geeta sarcastically says when asked about the election campaigns of political parties, “they spend five years just to ask for votes.” I come to us once.

From weddings to other public events, Valmikis use their utensils and sometimes carry their own food to weddings. For the comparatively less deprived SC communities of Solankis and Galchars, the situation is slightly better because of their vote bank. “They have different utensils for us in their homes,” says Dinesh, a member of the Gohil community in Sankar.

“The difference is stark. Our newly married couples cannot enter temples and have to worship from outside. We carry our utensils and sometimes even food to their weddings. They mostly do not attend our weddings – And even if they come, they give cash and leave,” says Shilpa, another member of the Valmiki community, describing the deep discrimination.

Even election candidates coming to Valmiki Basti “do not enter houses or touch members of the community. They give verbal assurances and walk away”, says Shilpa. Some candidates visit homes of other less-disadvantaged communities and have tea while campaigning.

Shilpa’s husband Bhangi Pagwan Bhai Veerchand tried several times to apply for the post of a sweeper. Finally, he gives up and hopes that his son Shivam, who has a master’s degree, will improve the family’s financial condition. But he too failed to get a job and now helps his father and uncles in farming.

Shilpa’s husband Bhangi Pagwan Bhai Veerchand shows the form which he had filled to get a house under the PM Awas Yojana.

Caste discrimination extends to government schemes as well. Shilpa’s family applied thrice for a house under the PM Awas Yojana but their forms either did not reach the concerned authorities or were ignored. “Once an officer from Palanpur also came to our house for enquiry. They said since we already have a roof, we don’t need a house,” says Shilpa, who lives with six family members in a one-room house with no washroom or a pucca roof.

Daman: From Ground to Representation

Dhanera is one of the largest constituencies with scheduled castes, whose total number is 28,000. Furthermore, it has a tribal population of around 9%. But neither SC nor Schedule Tribe (ST) has any representative.

According to the National Crime Records Bureau, Gujarat was among the top five BJP-ruled states with the highest number of crimes against Dalits in 2018.

As per the rule, the underprivileged have been given some government land for cultivation. Masra Hamira Galchar (62), a native of Malotra, lost her land and son in 2019 in the first wave of the pandemic. Now he works as a daily wage laborer on other farmers’ lands for Rs 200 a day.

In 2002, Galchar was given six bighas of land. When water crisis hit the village, he was in no position to spend lakhs on borewells. Left with no option, he approached the Patel of the village, who arranged for irrigation on the condition that he would have a “75% share in the produce”.

“Despite working hard on my land, I had only one-fourth of it left,” says Galchar. In 2018, he finally asked Patel for another part. When he refused, Galcher stopped working for him.

Galchar collects his crops at one place to sell some of them and use the rest as cattle feed. The same night, “Patel and some others burnt his crops”. When Galchar and his family reached to douse the fire, they were ‘beaten up’.

When he lodged an FIR at the Dhanera police station, Patel claimed that the land belonged to him and that Galchar had burnt “his” crop. The police believe his version and the case is pending in the Palanpur court for the last four years. Since the matter is sub-judice, the Galchars cannot access the land.

Masra Hamira Galchar of Malotra village showing the papers of her land.

Showing documents and a copy of the FIR in support of his claim on the land, Galchar says, “Being of the same caste matters more than being fair.”

Galchar, who is in debt of lakhs, has already spent at least Rs 3 lakh on the court case. When asked how he would repay the loan or whether he was sure of getting his land back, he only replied with a pitiful smile.

Meanwhile, Patel has his own house and land, and continues his ‘one-fourth share’ business with other farmers in the village.

Between 2003 and 2018, caste-based atrocities against Dalits and Adivasis in Gujarat increased by at least 70%. Despite the Rashtriya Swayamsevak Sangh (RSS) pledging to end caste discrimination, the situation has not changed.

Shilpa points and asks, “Is this a way of maintaining respect?”

Saral is also known as Ambedkar Nagar. However, fasting Dalit women are not allowed inside the temples. Caste discrimination is part of the culture and social fabric in the villages of North Gujarat.

The author is a Delhi-based freelance journalist reporting on issues of unemployment, education and human rights.

Click on the link below to read the report originally published in English: